Benazir Bhutto, who was killed in a suicide attack at the end of 2007 stated in November that the Osama bin Laden, the head of the international terrorist network al-Qaida, had been killed. Bhutto claimed that she even knew the man who had killed the prime suspect of 9/11 terrorist attacks in the USA. According to Bhutto’s words, Bin Laden was killed by Ahmed Omar Saeed Sheikh – one of those convicted of kidnapping and killing U.S. journalist Daniel Pearl. 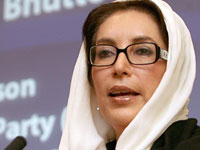 Bhutto released that statement on November 2, 2007 in an interview with Al-Jazeera TV channel. Bhutto spoke in English in the program titled Frost Over the World. However, no one paid any attention to her words. Speaking about the enemies, who did not wish to see her back in Pakistan, she said: “Omar Sheikh is the man who murdered Osama bin Laden.”

The video of Bhutto’s interview to Al-Jazeera can be found on YouTube (click to watch the video). The assassinated Pakistani prime minister says the words about Bin Laden’s killer during the second minute of the interview. She stays absolutely calm when she pronounces the names. More than 600,000 people have already viewed the video.

Correspondent David Frost, who interviewed Bhutto, did not even care to ask more questions about the sensational statement. Frost, who is believed to be an experienced journalist, did not even ask Bhutto when Bin Laden was killed.

Benazir Bhutto’s interview to Al-Jazeera received very little attention from the media. There was practically no newspaper in the world who published the news on its front page, although tens of thousands of people discussed the news for two months. It just so happens that even Al-Jazeera messed it up.

There was no official who commented on the information. Not a word was said from the CIA and the FBI. They did not even lift a finger to reject it. Absolute silence. But the U.S. administration promised a reward of 25 million dollars for Bin Laden’s body, dead or alive.

Benazir Bhutto is now dead. She cannot say anything about her sources of information.