The draft report made by international observers on the results of the forthcoming early elections of the Georgian President (on January 5, 2008) was distributed in Moscow. The report will be exposed on January 7, but a certain part of it has already surfaced. Officials from Europe’s leading countries and organizations criticized the events that took place in Georgia during the election campaign. To all appearance, Europe decided not to support USA’s protégé, Mikhail Saakashvili. 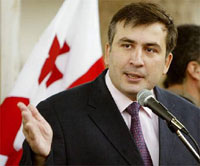 “The unprecedented pressure which the authorities put on the opposition is especially conspicuous. The arrest of the former Minister of Defense, Irakly Okruashvili, who dared to stand up against the president, was a blatant decision to make. Instead of presenting the evidence proving the president’s innocence, the oppositionist was put into prison where he was forced to disavow his previous statements,” the draft report says.

International observers set out their concerns about the dispersal of the opposition rally in Georgia’s capital Tbilisi on November 7. “The coercive dispersal of the opposition meeting totally contradicts to the norms of the freedom of meetings. Georgia has done nothing to give clear explanations of events that happened in the center of Tbilisi on November 7,” the draft report runs.

The document did not leave the story with the Georgian TV channel out of its attention either. “The Georgian authorities roughly violated democratic norms guaranteeing freedom of speech. The country’s largest oppositionist channel stopped its broadcasts as a result of the coercive seizure. When the channel resumed its programs under the pressure of the international community, they started to intimidate its staff, which eventually made people flee. The opposition was virtually deprived of the opportunity to access television and radio broadcasts,” observers wrote.

“The elections could not correspond to many criteria that are commonly used in Europe. These are not elections, but a referendum in president’s support. The presidential administration and the president himself exerted an immense influence on the process of the past elections. The abuse of the so-called administrative resource was definitely a part of it. If this can be referred to as administered democracy then these were administered elections,” the report of the OSCE mission said.

“The Central Election Committee must urgently conduct investigation on all counts of those violations. If it is proved that the elections were fair, in this case they can be considered neither free nor honest,” a statement from the Foreign Ministry of Great Britain said. “Judging upon our standards, the elections were unfair, non-democratic and not honest,” the Foreign Ministry of Germany said in a statement.

Even the U.S. administration set out its disappointment in the Georgian elections. “The USA points out several positive aspects in the past elections. However, our estimation coincides with many preliminary data and conclusions made by independent observers. OSCE observers, for example, said that the elections did not correspond to many international obligations and were shadowed by considerable obstacles for opposition parties and the use of administrative resources to achieve certain political interests,” a statement from the U.S. state Department said.

It seems that the West has revised its favorable attitude to Mikhail Saakashvili. It is not ruled out that businessman Badri Patarkatsishvili, the major rival of the retired president, may have used his influence. The report, which international observers made on the results of the voting, reflects all numerous violations which took place during the pre-election campaign.

Mikhail Saakashvili may now count the last days of his stay at power. The current Georgian administration has failed to build the democracy that would bear at least a slight resemblance to the Western analogue. The pre-election campaign was turned into the laudation of one leader, which resembles the worst form of dictatorship. The USA and Europe can not wait anymore for Saakashvili and his team to regain consciousness, and they decided to place their stake on another person.

Logic comments? Quite enough. They definitely could be included in the report on the results of the presidential elections in Georgia, which would be exposed two days after the vote, on January 7. One could think that the West started to give sober explanations to the events happening in a small and proud country which struggles with the legacy of the 200-year Russian yoke, as some Georgian textbooks on history say.

As a matter of fact, there are no such estimations in the report or statements from Western organizations. One may find only minor remarks to the pre-election campaign that is being held democratically, according to Western standards.