The match included 25 double faults, one on a second serve that landed wide of the doubles alley. There were 91 unforced errors and 13 service breaks, resulting in 2 1/2 hours of fitful tennis before a stadium crowd that groaned at the mishits and missed chances. 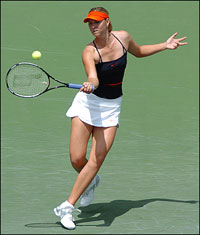 Maybe one match every 20 months between Maria Sharapova and Venus Williams is enough.

The two Grand Slam champions played Sunday for the first time since the 2005 Wimbledon semifinals, and Sharapova was slightly less erratic, winning 2-6, 6-2, 7-5 in the third round of the Sony Ericsson Open.

"I'm a fighter and a big competitor," Sharapova said. "That's why I play the sport. I enjoy the battle of it, and a lot of my matches, it depends on who fights more in the end."

Appropriately, the final shot - a forehand by Williams - sailed 10 feet long. Both players blamed the sloppy play on the gusty wind common on Key Biscayne.

"You know you're not going to play your best tennis," Sharapova said. "You're always going to have to adjust. You definitely can't get frustrated."

Sharapova overcame 13 double faults to exact a measure of revenge from the Williams family. She was drubbed by Serena Williams in the Australian Open final in January.

The result prevented a potential fourth-round showdown between the Williams sisters. It would have been their first meeting since the 2005 U.S. Open.

Sharapova hit the wildest shot - landing a second serve closer to a changeover chair than the court -- but Williams missed more than half her first serves and committed 55 unforced errors. Slowed in recent months by injuries, Williams was unseeded and playing in only her third tournament since July, the AP reports.

The victory sends Sharapova into the fourth round against the winner of the Serena Williams-Lucie Safarova match, which was postponed until today because of rain. Sharapova's win eliminated the possibility of the first Williams sisters match since the 2006 Australian Open.

While it was windy, there were only a few drips until 9 p.m. and the lack of delays got the Sony Ericsson Open back on schedule, making up the seven second-round matches that were postponed Saturday because of four rain delays.

No. 4 seed Nikolay Davydenko and No. 6 Tommy Robredo led that group into the third round, and that included unseeded Amer Delic of Jacksonville, who upset No. 31 Jose Acasuso 6-0, 6-3.

Meanwhile, in the bottom half of the draw, eight men were into the fourth, setting up a Tuesday rematch between No. 3 Andy Roddick and No. 13 David Ferrer, the Spaniard who took Roddick down in the quarterfinals here last year and who could be facing Roddick in the Davis Cup tie in Winston-Salem, N.C., April 6-8.

Also through to the final 16: No. 2 Rafael Nadal, who got a walkover from injured Olivier Rochus; No. 10 Novak Djokovic and No. 12 Andy Murray.

Sharapova, the No. 1 seed and consensus favorite to win this tournament, is into the fourth round along with No. 2 Justine Henin, who barely escaped upset, and No. 6 Nadia Petrova, No. 9 Anna Chakvetadze, No. 10 Dinara Safina, No. 14 Shahar Peer and No. 15 Na Li.

But this is the end of singles play this week for fifth-seeded Martina Hingis, who was beaten 4-6, 6-3, 6-2 by 18-year-old former world junior No. 1 Agnieszka Radwanska.

There were two major surprises. Indian Wells winner Daniela Hantuchova, seeded 16th, was upset by No. 18 Vera Zvonareva 6-2, 6-4. Then, No. 5 Fernando Gonzalez, having his best season, was stunned by unseeded Paul-Henri Mathieu 6-3, 7-6 (6).

You can criticize Sharapova for not being Grand Slam sharp, but you can't fault her fighting spirit. She did her worst serving at the end of the opening set, got things right in the second, then had to rally from a break down in the third.

Williams had chances to take control of this early tournament blockbuster when she quickly moved to a 30-love lead at 5-5 in the third set with service winners of 119 and 112 mph.

She would have four chances to go up 6-5 and failed each time. Sharapova made an excellent play at 40-30, stretching wide to her right to cover a Williams serve down the middle and forcing an error. And Venus later double-faulted, made an unforced error, then slashed a cross-court forehand wide on break point, sun-sentinel.com says.