Scotland: Champion of terrorism and sport 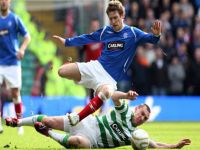 The Old Firm "derbies" between Glasgow Rangers and Glasgow Celtic Football clubs have been a mainstay of Scottish Football Championships and Scottish Cup finals for decades. Now it appears a new level has been reached: sectarian violence turned into soccer terrorism.

Parcel bombs which could have maimed or killed have been sent to three people linked to Glasgow Celtic FC - two to the team coach Neil Lennon, one to Trish Godman, former deputy presiding officer of the Scottish Parliament and one to the lawyer of Neil Lennon, Paul McBride QC. The liquid explosive devices could have killed or injured the recipients, or those that handled them, according to experts.

This comes days before a critical football match between Glasgow Rangers and Glasgow Celtic football clubs, which could decide the Scottish Championship this season. Experts claim that the devices are crudely made and are probably nt connected to paramilitary activity.

The Scottish First Minister, Alex Salmond, has said Scotland will have to unite to condemn such behaviour.

Meanwhile, Scotland remains the pioneer of soccer terrorism in the eyes of the international community.