Benfica defender David Luiz is set to be the target of Manchester City and Chelsea FC in the January transfer window. In the Premier League, the stupidity of Blackburn Rovers owners in sacking Sam Allardyce is starting to sink in. 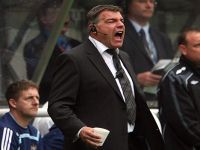 There seems no end to the financial clout of Manchester City FC, sitting in joint second place behind fellow Mancunians United and London's Arsenal at the end of 2010. On the New Year shopping list is  Edin Dzeko, of Wolfsburg (Germany) for around 25 million GBP. David Luiz, the Benfica defender, may also be heading to Eastlands, in a 35 million GBP deal.

Meanwhile the decision by the new owners of Blackburn Rovers FC has prompted the condemnation of wide sectors of soccer pundits in the UK, from supporters to players to managers alike. The latest was the ex-England manager Graham Taylor who said that the decision to sack Sam Allardyce left him unable to eat chicken or turkey at Christmas.