Two hours, twenty-one minutes and fifty-nine seconds. The winner of Chicago 2009 Marathon came out on top of a very strong field on Sunday morning in London, destroying the field with an amazing push of pace. 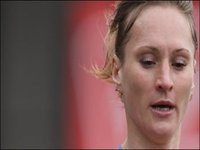 Shobukova, the European record holder for the 5,000 metres, proved too strong for the field today, managing the first half in a fast pace, destroying the winner of the last two events in London, the German based Irina Mikitenko and the British Mara Yamauchi and shredding the field with an even greater boost of speed in the second half.

In the press conference after the race was finished, Liliana Shobukova stated that she decided to push the pace more in the second half of the race “to break up the pack” and that she did, leaving fellow Russian competitor Inga Abitova (second) and the Ethiopian Aselefech Mergia (third) in her wake.

In the men’s event, the Ethiopian Tsegaye Kebede came in first place in his second London Marathon (after finishing second last year), ahead of the Kenyan Emmanuel Mutai and Morocco’s Joaurd Charib in two hours, five minutes and nineteen seconds, the third fastest time in the history of the race, which began in 1980.