Doctors allow Russian man to live with nails in the head

Doctors discovered that Gennady Varlamov, 67, from the Russian city of Ekaterinburg has several needles stuck in the head. But neither the patient nor medics have any idea how the needles could get there. The patient appealed to doctors and complained of a headache. But doctors hesitate to extract the needles out of the man's head as they believe the headache was not connected with them.

The patient was shocked when saw an X-ray photography of the head. “My hair stood on end when I saw there were several needles stuck in my head. This is incredible that I have been having them all my life,” the man says.

Neurosurgeons tell Gennady Varlamov that for the time being the needles are no longer dangerous either for his life or for his health. There was highly likely some other reason of the man's headaches. Chief of the neurosurgical department at the Ekaterinburg regional clinic, Yeugeny Danilov, says: “The patient actually has some foreign bodies in his head. However, he has been living with the needles in the head for many years already, that is why he should not pay much attention to this fact. The patient needs no surgery.” 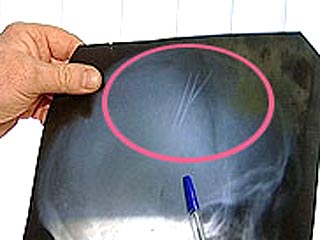 Neurosurgeons in Ekaterinburg say they have never seen patients with needles in the head. At the same time, medical sources mention such cases. Many years ago, people stuck needles in the head of an unwanted baby to kill him, and this crime could not be disclosed. But Gennady Varlamov says he was a wanted baby in the family and had both parents, that is why it is unlikely that he had got the needles at his infant age.

Doctors from all over the world can tell many shocking stories of the type. American worker Patrick Loler, 23, had a 10-centimeter nail in the head. Once, the man complained to his dentist of toothache. X-ray photography revealed the patient had a 10-centimeter nail stuck in the skull. After a closer examination doctors discovered that the nail was four centimeter deep in the man's brain. As it turned out later, the worker was engaged in construction of a ski resort in Colorado and one day he negligently pressed his puncher twice and one of the nails got stuck in his head. The nail went through Patrick's palate and stuck in the brain.

In December 2004, doctors at a hospital in Seoul performed a unique operation. A patient complained of terrible headache. Doctors were shocked to see that the patient had a five-centimeter nail in his forehead.

It looks like there is enough room for foreign bodies in the human brain. At the end of 2003, doctors removed a splinter of wood out of the head of a Malaysian citizen after it stayed there for five years. At that, doctors stated the patient was a lucky man indeed. If the splinter had moved another half a centimeter and got into the brain the patient would have inevitably died.

Australian worker Brad Shorten drove a nail in his head just for fun to demonstrate a real accident at work to his colleagues. He first had three bottles of beer, then took a puncher and put it to his head. The man swears he took a cartridge out of the puncher and turned off the compressor before that. But a nail somehow got into the man's head. It took neurosurgeons in Melbourne four hours to extract the nail out of the brain. Even being on the surgical table Shorten boasted he could easily take the nail out of his brain with pliers.