Energy vampires do not need fangs to live

Energy vampires do not realize their harmful qualities

A lot of people will probably say that they sometimes experience weird and unpleasant feelings after even a short conversation with others, whether it is a friend or a stranger. A person may feel fagged out and weary after such communication. As it turns out, these conditions can result from an “attack” of an energy vampire. Unlike fictitious vampires that climb out of their coffins at night and kill people drinking their blood, energy vampires need to absorb other people's energy. 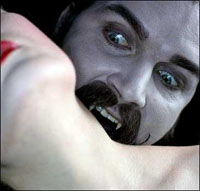 Russian parapsychologist, Sergei Nikodimov, an expert of anomalous phenomena, is certain that energy vampirism is a part of every-day reality. “Numerous research works conducted by specialists of bioenergetics all over the world showed that all people can be conditionally divided into two major categories – vampires and donors. Each person radiates with live biological energy, which he or she can give to someone or take from someone. This quality of give and take forms with every human being during the moment of birth. If a baby is born as an energy vampire, this child is extremely capricious. When they grow, they try to follow parents everywhere on their heels and even try to sleep with them at night. As a rule, a person does not realize the need in other people's energy: the energy exchange happens on a subconscious level. However, a human body senses this invisible communication too and reacts with fatigue, headache, etc. A person may feel dog-tired at night and have absolutely no wish to get up in the morning. The loss of energy through human communication may also result in depression and weakened immune system,” the professor said.

Sergei Nikodimov believes that energy vampires do not realize their harmful qualities. The majority of them may know nothing about dangerous effects that they show on other people: they act instinctively as a rule. “Energy vampires feel at times that they need to fill up their stock of biological energy just to be able to live well. They take this energy from the people around them, keeping up a normal state of health and damaging other people's physical state,” the scientist said.

Brushing all those negative things aside, one may say that energy vampires can be very good individuals indeed. They can even suffer when they see the sufferings of other people, which they originally caused. To crown it all, vampires can give way to depression when they see that no one wants to be friends with them.

Energy vampires subconsciously provoke scandals to refresh themselves with the power of contradictions. Any person becomes defenseless in the sate of anger: this is exactly the moment, when vampires “feed themselves.” They always try to visit the sites of tragic accidents. A lot of energy vampires can be passionate fans of sports games, such as football, for instance: huge stadiums accumulate a vast amount of psychic energy. Energy vampires hate being alone: they always need to have someone beside them, whom they can talk with at any moment. They usually say phrases like: “Stay with me a little, I am bored,” or “Don't leave me alone, I'll die.” In addition, they constantly want other people to feel sorry for them, which irritates donors and makes them give their energy away to vampires.