Desperate parents save daughter conceiving another baby as a donor

Natasha was 3 years old when she was diagnosed with leukemia. The transplantation of bone marrow was the only way to treat the disease. Natasha's  brother was conceived and born to save her life. 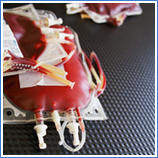 The village of Maloe Trifanovo is a small nondescript settlement. There is no school in the village, there is no hospital either. A first aid post is the only medical institution. The majority of the village residents are employed in Artemovsky, the main town of the district. Andrei Bogdanov also goes to work to Artemovsky every day, he works at the railway station. His wages are good for the rural area. But the cost of medicines for his daughter's treatment is high.

Natasha memorized the words chronic myelin leukemia when she was 3 years old. The parents took Natasha to the regional hospital in Ekaterinburg after she lost weight dramatically within two weeks.

“It did not take long to diagnose the illness. There was a high level of intoxication of the body, the girl was in a terrible condition. Cancer affected her bone marrow. The transplantation of bone marrow was the only salvation for the girl,” says the hematologist of the Ekaterinburg regional hospital No1 Farida Perina.

The above events took place nine years ago. Transplantation techniques were still in an embryonic state at the time. Besides, Natasha felt a lot better after chemotherapy. Her parents hoped that the girl would overcome the disease.

Natasha began going to school, she was a good pupil. However, she had to travel to Ekaterinburg hospital now and then. The doctors insisted that an urgent operation be performed. A child, a close relative of the girl could be her donor, stem cells were needed to avoid rejection. Tests showed that Natasha's elder sister was not fit to be a donor. Oksana, the mother of Natasha, says she made up her mind pretty fast. “I did not spend hours thinking it over. The doctors said a donor should be a close relative. Well, I bore a child on purpose, Vanya became the closest relative to Natacha,” says Oksana.

The Bogdanovs went to Moscow 18 months ago. The management of the railway station furnished them with free-of-charge tickets. Still, they had to borrow money to pay for board and lodging, not to mention the cost of medicines and treatment for Natasha in a Moscow hospital. They spent about 150 thousand rubles during their five-month stay in Moscow, a sums looks quite horrendous to an average Russian family living in the rural area.

Natasha's hair fell out after another course of chemotherapy. She spent most of her time in bed, she could not run about the place any more. But she got really excited on the tenth day after the operation when she saw the results of her blood test.

Natasha did not waste her time while in hospital. She studied in accordance with the school curriculum. She successfully passed the annual exams for the fourth grade when she returned home. Natasha and her little brother Vanya seem to be inseparable. The parents told Vanya a story how he saved his sister. The little one keeps asking about Natasha's health all the time, he makes sure that she takes medicines on time. But one more operation is urgently required because cancerous cells reappeared in Natasha's blood. The Bogdanovs are getting ready for another trip to Moscow. A local TV station showed a film on the family. The people began to donate small sums of money to a special fund. Soon they raised about 20 thousand rubles. Then a woman brought in the missing amount. The woman requested to remain anonymous. “A misfortune can happen to anyone,” said she.