Fashion, canons of beauty and people’s admiration are transient. Every generation observes a kaleidoscope of sex symbols, and the period of reign of any of them is very short. But there are icons of style and beauty that remain unfading in all epochs even when mass media no longer treat them as mythical gods. 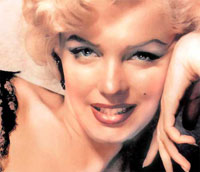 The name of Marilyn Monroe is still considered to be the synonym of woman’s beauty and charm. If the actress were alive she would have celebrated her 81st anniversary on June 1. Marilyn died 45 years ago but the myth of eternal femininity she created is still alive.

The way Marilyn presented herself captivated even presidents. What was her unique sexuality? Let us have a look as the portrait of the blonde admired within several epochs.

Legends were spread about Monroe’s mincing step in the 1950s. Arthur Miller who was Marilyn’s husband said that her footprints on sand made an ideal line thanks to amazing movements the actress did with her hips. And the effect is wonderfully employed in the scene when Marilyn first appears in Some Like It Hot.

How did she manage to move that way? Some envious people said that Marilyn had one leg a couple of centimeters shorter than the other and that she had to walk rocking the hips that way to conceal the defect. Others stated that she purposefully shortened a heel on one shoe to be able to walk like that. Can you imagine the fabulous blonde doing so personally? The actress explained that she had learnt to walk when turned 18 months and took no walking lessons since that time. It is highly likely that Marilyn minced rocking her hips thanks to incredibly high stiletto heels.

Monroe’s coiffure looked as if it was just a moment before ruffled with a man’s hand. When brown-haired Norma Jean (this is the real name of the actress) first dyed her hair platinum blonde that became a very important change for her. She carefully watched that her hair must be always impeccably dyed and no brown hair roots could be seen. She always said that she was a blonde in her soul.

Marilyn’s unforgettable smile was always half-open lips as if she was going to kiss, lipsticked bright and shiny, and revealing wonderful pears of her teeth. The slow smile accompanied with throwing the head back and languid glance of her eyes drove men mad. Her languishing eyes with thick black eyelashes were either enigmatically relaxed or stared in a childish manner thus revealing their clear bright blue color. That was how Monroe managed to combine sensuality and innocence, passion and obedience in her manners.

Once the actress was asked how one could make his voice sound sexy, and she replied that thinking about something pleasantcouldproduce the effect. Monroe’s voice was a mixture of baby-talk and cat’s purr.

Marilyn joked that she would rather prefer to symbolize sex if it was said that she must symbolize something. However, the recognized sex symbol never appeared nude in her films. There are just pictures that show her breast, at that all of them were made either at the beginning of her actress career or a couple of months before she died.

There is a legend saying that some film producer reprimanded Marilyn for her protruding bosom. But the actress replied that she would never conceal her gift of nature under a hated bra. But someone of Marilyn’s company said after her death that the actress attached special pads onto the reverse side of her dresses to make her bosom look bigger. The man even put up the pads for sale for an incredible sum of money.

Marilyn liked the white color and everything colored white: her hair, illumination, champagne, bed sheets, sugar, milk and Chanel No.5 packaging. She did not like to sunbathe and wanted her skin to stay pale.

There are many pictures showing the actress close to water, on the beach and near swimming pools. Wet hair, drops of water on her face and glares of water just intensified Marilyn’s eroticism.

She sang that diamonds were girls’ best friends but contrary to the tradition to wear diamonds together with black clothes she seldom wore black dresses.

In public Marilyn often got jewelry as presents but in her everyday life she liked shiny bijouterie, paste. Many pictures show her wearing strings of pearls or crude amber. She liked simple beads made of big round parts.

When Norma Jean joined dramatic courses she informed her teachers that she was stuttering with a special letter and had an opportunity to study at home and attend no lectures within about a year. The future actress persistently accomplished the instructions of her teachers. Marilyn polished her style, manners, movements and mimicry within many years and even when she was already well-known. Her style is unique and is hard for reproduction without being vulgar. The style made Marilyn Monroe the sexiest woman of the 21st century.