When Harney was born he had 25 fingers: six fingers on every hand, six toes on one foot and seven on the other

Devender Harney is a fifth-form pupil in an ordinary Indian school. Unlike many other school children, Devender always willingly attends lessons. India's web source Webindia123.com reports that the boy has 25 fingers on his hands and feet which is no hindrance in his everyday doings. More fingers are a serious advantage as compared to other children, Devender says. 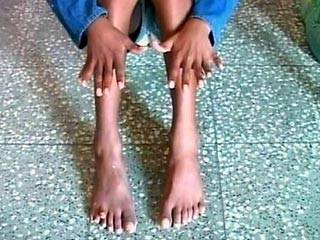 When Harney was born he had 25 fingers: six fingers on every hand, six toes on one foot and seven on the other. Teachers of the school say that the phenomenon of surplus fingers is curious for other children. They love to watch how Devender manages to do this or that having more fingers than they do. Teachers add that the boy is on good terms with other pupils, and there have been no conflicts in connection with his peculiarities.

Devender is fond of sports, and indulges in sport at school and afterwards. He likes cricket. The boy says that he does everything himself; he wakes up, practices yoga, brushes his teeth, takes bath and so on. Devender’s mother is happy with the way her son does his everyday work. “God gave my boy 25 fingers; I feel that he will attaint much more than people having 20 fingers may. Doctors say that his health is good, and the phenomenon causes him no problems,” Devender's mother says.

In many similar cases, surplus organs turn to be immature and cannot function adequately. As for Devender, all of his fingers are mature and function wonderfully.

The official medicine calls the phenomenon of surplus fingers on hands or feet polydactylism; this is one of the most frequent inborn anomalies with babies.