Criminalistics expert Oleg Avdeichik from the Russian city of Pskov is a unique person: it is enough for him to see palm prints to say how the owner of the palms looks, where was born, what his turn of mind is, what diseases he suffers from, if he is drugs addicted or not and if he is disposed to violence. During many years of his practice in criminalistics, Oleg has compiled a collection of over 55 thousand palm prints. It helped him create a unique system thanks to which the expert arrived at a conclusion that killers and violators have peculiar dactylograms that can tell everything about the inclinations of their owners. 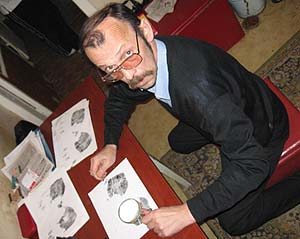 The expert says that lines on the right hand contain information about the organs located on the right side of the body and lines on the left hand tell us about our left-side organs. The dark lines, papillars, are congenital; they are conditioned by our genes. And the white lines are acquired and form interlacing as a result of the organism physiological condition. For example, the expert demonstrates two couples of palm prints of a student. The guy had not enough money and had to start working hard at an enterprise. Soon, not enough sleep and hard working conditions undermined his physical condition and that could be seen in the prints of his palms.

The expert can easily define where a man comes from just having a glance at his palms. He says that people coming from the south have more complicated helicine patterns of fingerprints. In hot weather, sweating goes through the skin, including the pores in the papillars on feet and palms. Sweating is more intensive when people have more complicated patterns on feet and hands. At that, northern people have basically simple patterns.

Oleg Avdeichik graduated from the university where he studied nuclear physics. When he got married he worked at an enterprise producing radio transmitters. Soon, his friends told Oleg he could have some job at the Pskov regional Interior Ministry's department. Indeed, he was offered a job at the police operations department where he had to study dactylograms. Unlike other experts, Oleg Avdeichik liked the work at once. He persistently studied the patterns on fingerprints kept in the police archives and soon disclosed a crime. The expert managed to expose a shop-lifter using his fingerprints taken after a previous burglary where the man was involved.

The police are happy to find from one to three fingerprints of criminals on the crime scene because criminals never leave all of their fingerprints. Oleg Avdeichik developed a unique dactyloscopic formula that helped him reconstruct the papillar patterns on other fingers of a criminal using just a couple of discovered fingerprints. The method helped the expert identify soldiers killed in Chechnya when men were so severely crippled during hostilities and only a couple of fingers remained intact for identification.

Criminalist Avdeichik had to study dermatography, the science allowing to see what diseases people suffer from by the patterns on their palms, because of his daughter. The girl was born with a heart trouble, and doctors stated she would not live long. Oleg Avdeichik compared the daughter's handprints before and after an operation on her heart and happily found out that the girl was healthy after the operation. Doctors also stated that the girl no longer had the heart trouble. Now, the father makes handprints of the daughter every month not to miss a disease.

The criminalist can even say if a couple risks having children with congenital defects or not: if a father has arc patterns on fingers and a mother has helicine ones they are highly likely to have babies with defects.

Within the 25 years of his work at the police Oleg Avdeichik compiled a large dactyloscopic database. He encoded fingerprints of 55 thousand people into formulas and made a special matrix of their numerical values. The expert was surprised to see that formulas of serial violators and killers fell within the same sector of the matrix, the zero one. Majority of villains had peculiar dactylograms that revealed some anomalies in their organisms. The anomalies appeared because of genetic problems of their family members, some chromosome diseases and external influence upon an unborn foetus.

Oleg Avdeichik says that even if fingers get seriously damaged, cut or even burnt with acid, the pattern on fingers will still be restored completely in some time. Only skin transplantation may help change the finger patterns.

Oleg often gets invitations to conferences in different parts of the world. Geneticists, anthropologists and criminalists all over the world would like to learn more about his unique method. Unfortunately, the Russian expert does not have enough finance to travel all over the world and impart his experience to colleagues in various countries.

Today, Oleg Avdeichik can tell a drug addicted man by his fingerprints: he says that majority of drug addicts have finger lines with some gaps. And he is working on a more difficult task now: the expert wants to learn to determine the blood group by palm lines.

On the photo: Oleg Avdeichik