The woman suffered from aquarium fish 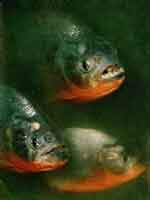 A woman from the city of Saransk fell a prey to piranhas, which lived in her own aquarium

According to Inrefax-Povolzhie news agency, the woman went to an acute care station of Saransk asking physicians to take off a wedding ring from her swollen finger.

An examination showed that the edema and festering of a hand were provoked by violent bites. The old lady admitted that she had suffered from that attack of aquarium fish.

The accident occurred on the 9th of May. The pensioner decided to please her son by cleaning his aquarium while he himself was away.

The poor lady didn't suppose that her son had acquired piranhas for his fish tank. She started catching the fish by hand. But the predatory fish showed resistance and tore out pieces of flesh from two fingers of the victim's left hand.

The physicians provided her with the necessary help.