Sex museums are mushrooming in different countries of the world. The first sex museum opened in Amsterdam just a while ago, in 1985. Nowadays there are approximately several dozen large sex museums running permanent exhibitions. 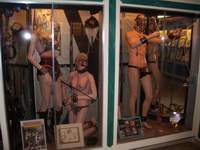 The museum owners seem to know well that a lack in variety of exhibits will sooner or later result in the shutdown of an enterprise. Therefore, they are doing their utmost in an attempt to make their museums stand out among the similar establishments.

Visitors of the Temple of Venus, the above mentioned sex museum in the capital of the Netherlands, can hear somebody saying “hello” in whispers as soon as they start examining the first exhibits. The hushed sounds definitely come from behind. The visitors turn around and see a life-size moving doll representing a middle-aged flasher or a sexual exhibitionist. A broad smile crosses the doll’s face as the raincoat on its body flies open. Around half a million visitors of the museum are greeted this way each year. The exhibition is arranged in a slightly chaotic fashion yet the collection is said to be pretty diverse.

An oil lamp from Carthage dating back to 100 BC is one of most notable exhibits. The lamp is shaped like a penis. A number of walking sticks manufactured in the 1920s are also exhibited. Needless the say, the walking sticks are penis-shaped too.

Visitors of the Museum Erotica in Copenhagen can take a closer look at the details of a private life of Hans Christian Andersen, the great Danish author of fairy tales. Lots of people seem to show interest in that kind of entertainment. The museum specializes in washing one’s dirty linen in public, so to speak. Naughty little secrets pertaining to Sigmund Freud, Aristotle Socrates Onassis and other celebrities of former times have been made available for public inspection.

Contrary to a popular belief, the United States of America is a puritanical country. There is not much worth bragging about when it comes to America’s sex museums. A large building houses the Museum of Sex in New York. Some visitors are likely to find its exhibits pretty boring since the museum puts special emphasis on sexual education. However, you had better check it out if you are interested in the struggle for the rights of sex minorities or history of prostitution.

A similar museum in Hollywood has a more relaxed and liberal ambient thanks to California’s fresh air and the proximity of Disneyland. To some extent, the objects on display are a hotchpotch that includes ancient Eastern figurines carved out of stone and patents for bizarre sex toys.

There was no sex in the USSR. To be more precise, sex was an integral part of medical science. Many Russians in their late thirties can easily remember a hefty tome called Women’s Diseases, one of the few most popular authorities on sexual education some twenty years ago. It stands to reason that Igor Knyazkin, an urologist by profession, set up the first sex museum in Russia.

Dr. Knyazkin says he drew inspiration from his daily work. He noticed that it was a lot easier for the patient to show where it hurts than talk about his problems. Wooden models of a penis proved to be extremely handy for the purpose of explanation and examination. The number of penile models in the doctor’s office had been steadily growing. Finally, a collection of 15,000 models was presented for public inspection in the center for the study and treatment of diseases of the prostate gland, a clinic that is actually headed by Dr. Knyazkin. The museum is located in St. Petersburg.

The St. Petersburg museum is mostly associated with one of its exhibits, namely the penis that is alleged to have belonged to Grigori Rasputin. Rumor has it that a fanatical devotee of the notorious Siberian monk got hold of the sex organ shortly after Rasputin was murdered. The penis was cut off Rasputin’s body either during an autopsy or at a later time when somebody took it away to desecrate the corpse. The devotee preserved the organ in alcohol and fled Russia.

He reportedly handed the item to Rasputin’s daughter in Paris. The daughter sold it to an antiquary after she became strapped for funds in the mid-1970s. Maybe the story has a grain or two of truth; maybe it is just a fiction. It is up for the visitors to form an opinion of their own.