Men of the world vote for most beautiful and desirable women

About 2.5 million men, the visitors of the AskMen.com website, voted for the traditional Top99 of world's most beautiful and desirable women for the year 2006. 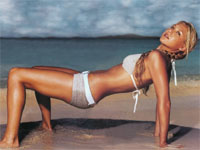 Men of the world vote for most beautiful and desirable women

The first place on the list was taken by a stunningly beautiful US actress Jessica Alba.

Another actress – Sienna Miller – took the second place on the chart. The third place was taken by actress Angelina Jolie, who does not need a special introduction. Jolie outstripped Brazilian model Adriana Lima, which had to enjoy the fourth place on the Top99.

Actress Charlize Theron, who won an Oscar for her part in the movie Monster, took the sixth place. Natalie Portman, one of the few human characters of Star Wars, ranked the ninth.

Supermodel Heidi Klum took the 11th position on the chart. The 12th position was taken by singer Jessica Simpson. Italian beauty Monica Belucci took the 15th place. “Catwoman” Halle Berry was lucky to enter the top 20 – she is on the 19th position.

Black beauty Beyonce completed the top 50 of most beautiful women of the world. Gwen Stefani, the former frontgirl of No Doubt, followed Beyonce on the 51st place.

Michael Douglas's fabulous wife Catherine Zeta-Jones and Jennifer Garner took the 67th and the 66th places respectively. Uma Thurman, who wanted to Kill Bill, took only the 78th position according to the poll.

Two Russian girls – tennis stars Maria Sharapova and Anna Kournikova – entered the list of most desirable women as well. Sharapova was more successful though: she took the 31st position, while Kournikova had to complete the entire list being on the 99th position.