Hollywood stars Nick Lachey and Jessica Simpson officially announced their divorce. This is a perfect example of how career can interrupt a relationship between to stars in show business. 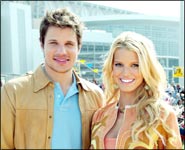 "After three years of marriage, and careful thought and consideration, we have decided to part ways. This is the mutual decision of two people with an enormous amount of respect and admiration for each other. We hope that you respect our privacy during this difficult time," they said in a statement released Wednesday, Nov. 23, according to realitytv.about.com.

In 2002, Jessica Simpson married her longtime boyfriend Nick Lachey. Since then,  Simpson has been featured in the book: I Do: Achieving Your Dream Wedding. The book tells the story of Jessica Simpson's wedding  and gives tips on planning your own wedding. Jessica Simpson and Nick Lachey went on to star in their own reality TV show on MTV called The Newlyweds. The show was an instant hit - mainly because Jessica Simpson's repeated blonde moments have kept audiences laughing.

A bit later, Jessica released a hit album, landed numerous endorsement deals, started her own beauty products line, and starred as Daisy Duke in the movie The Dukes of Hazzard.  While she was filming The Dukes of Hazzard, there were reports that Jessica had an affair with her costar Johnny Knoxville. Both stars denied the rumor.

Rumors weren't the only problems that came along with Nick and Jessica's success. Jessica's busy schedule resulted in the couple having less time to spend together.

In the late '90s, Jessica Simpson made the switch from Christian music to pop. Jessica Simpson signed a contract with Columbia Records and released her album titled Sweet Kisses. The album launched Jessica Simpson's career and featured hits like I Wanna Love You Forever and I Think I'm In Love. Simpson's second album, Irresistible, showed Jessica's more flirty, sexy side. Jessica Simpson then came out with In This Skin in August of 2003; many songs on the album were inspired by her marriage to Nick Lachey.