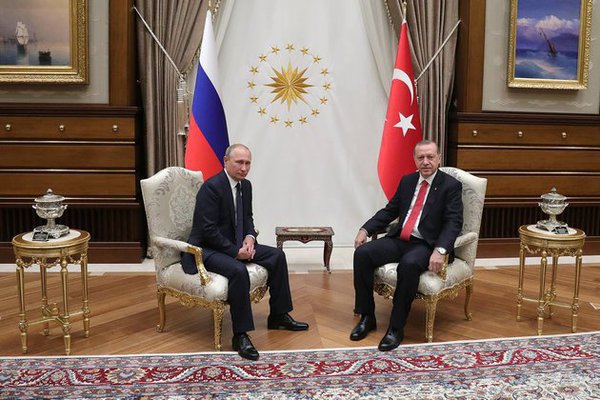 It is a bit the main enigma of recent months: from which side is Turkey and, above all, Ankara can still be framed within NATO? The speed with which events in the Anatolian country have evolved over the last few years is likely to overwhelm the European and Middle Eastern Chancellery, and not only that: if in October 2015, the shoot down of a Russian jet by Turkish aviation made appear the country as hostile to Moscow, a few months after the scenario appeared diametrically overturned species after the failed coup shot on July 16, 2016; on that occasion, it is just from the Kremlin the first call to solidarity with Erdogan, instead from the old continent and from Washington the condemnation of the coup attempt appeared in the eyes of the executive of Ankara too late. Then again, the wave of attacks that have kept Turkey under shake between 2016 and 2017 has added further elements of news in a foreign key until it comes to the talks in Astana, where Erdogan has in fact accepted the prospect of maintaining Assad in power sitting at the same table as representatives of Moscow, Damascus and Tehran. In all this, to what extent is the alliance with the United States a year away from Trump's election to the White House?

The first knot to dissolve: the US support to the Kurds

Next to the failed coup, when AKP militants (the Erdogan party) coming mainly from the deep Turkish province were still on their way to Istanbul and Ankara to hurl themselves against the military, it became apparent that Turkey would become a completely different country also in terms of its international positioning: Erdogan has immediately manifested the uneasiness of a condemnation of the coup plans which, according to his own government, arrived late and with more formal tones than felt by Washington. It is from there that the enigma on Ankara's positioning in NATO and the US side has become increasingly dense; knots came to the comb: Erdogan immediately made it clear that he would not appreciate the contacts between the US government and Fetullah Gulen, the billionaire preacher who has self-exiled in Pennsylvania in the early 2000s and considered by AKP leaders as the maker of the coup; at the same time, from Ankara also come intense signals of intolerance about US support for the Kurds in Syria and Iraq.

And this is precisely the first issue that is between Turkey and the United States; with Obama at the White House, Erdogan seemed almost to wait for the evolution of US domestic politics in the election campaign in November 2016. In this regard, after the cooling of relations with the previous US administration, the Turkish leader started to store not few expectations for Donald Trump; Hillary Clinton, who also as Secretary of State between 2010 and 2012 appeared to be in tune with Erdogan on financing plans for Muslim brothers during the Arab Spring and, above all, in supporting the Syrian groups against Assad, was defined last year by the Turkish president as 'novelist of Middle Eastern politics'. The arrival at the White House of New York's tycoon was, therefore, for Turkish leaders a source of hopes about the Kurdish question: firstly, the end of military aid that from Washington came directly to the Kurdish militia operating in Syria, just as Trump has suspended the support of the elusive "Syrian rebels".

So it was not: indeed, the US continued to arm the Kurds, until the Raqqa conquest and until the occupation of Syrian Arab majority territories; for Erdogan, the ties between the SDF (the Kurdish coalition in Syria) and the Americans are full of suspicion and serious misunderstandings, and one year after the election of Donald Trump between Ankara and Washington, the frost seems to continue. The biggest fear for the Turkish government is the formation of an autonomous Kurdish entity close to its own border: this is why at the beginning of 2017, after the implicit free way obtained from Moscow and Damascus following the first agreements of Astana, Ankara troops entered Al Bab creating a buffer zone controlled by Turkish ally militias aimed at breaking the territorial continuity between the Kherson-controlled canton of Afrin, and the Rojava provinces under the command of SDF. More recently, Turkish soldiers entered another part of Syrian territory and, more precisely, between the provinces of Aleppo and Idlib, surrounding the canton of Afrin; Turkey, therefore, with the fear of having a real corridor near the southern borders where the PKK (the main training of Turkish Kurds) could find political and military support, is seeking in all ways to prevent the formation of a strong Kurdish autonomous region in Syria and, on this front, not even Trump's election has brought closer the positions of Ankara and Washington.

As mentioned, there is another point of great divergence between Turkey and the US which is currently also involving the relations between Erdogan and Trump and which seems to be a trawl from the last months of Obama administration - the case of Fetullah Gulen. According to Ankara, there is he behind the attempted coup of July 16, 2016: by Erdogan's guru at the end of the 90's, the rich Turkish preacher turned himself into an enemy of the president until he himself decided to go to living in Pennsylvania in the early 2000s. From there, through its political attachments and thanks to its economic power, Gulen would still have influenced a large part of the Turkish state both in public administration and within the army up to the proposed reconstruction from the AKP leaders, to design the last year's coup; that is why Erdogan redeems him at all costs in Turkey and that is why the issue is likely to create further diplomatic embarrassment with Trump and his administration.

The US, in particular, has never taken a stand on the case, and even less, the US president has ever expressed his personal opinion about the request for extradition; and this is perhaps the most irritating to Erdogan: what appears to be an important objective for both the image and the purely judicial nature of the US government is a fact of the second place ever really placed in the center of the meetings between the two heads of state.

What will be the future scenarios?

One thing is certain: relations between Ankara and Washington will also be cold, but none of them intends to break it down. One year apart from Trump's victory, the various issues on the plate do not seem to be close to a resolution, however, between Turkey and the US, frost can not be broken at the moment: on the one hand, even if Erdogan is getting closer to Russia and further away from the Saudi monarchies, he can not definitively surrender the step to Washington because of the failure to resolve the Kurdish and Gulen issues; on the other hand, Trump can not lose sight of the fact that the Turkish army remains the second most important in terms of men and means within NATO. The enigma on Turkey's positioning will perhaps remain the same for a long time, but a definitive stop of relations between the two countries does not seem to be in the reach of current events.