Vatican's Secretary of State to come to Russia to change course of history?

For centuries, the Vatican has been an inspiration for crusades against Muslims and Orthodox Christians. The first meeting between the Pope and the Patriarch of Moscow took place only on February 12, 2016 on a neutral territory, in the capital of Cuba. Now the world is getting ready for a new sensation: the Pope may come to Russia already this year. 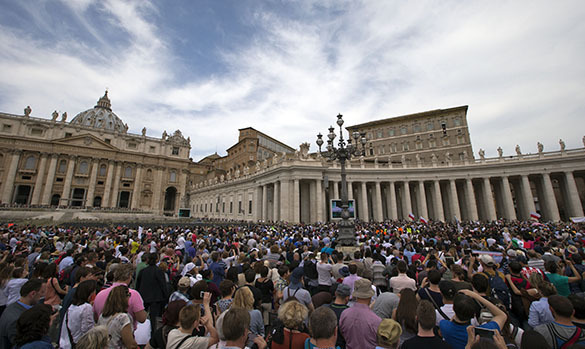 In the second half of the 16th century, Catholicism that had reached the peak of its power by that time, saw the Russian Orthodox Church as its prime enemy. In the Time of Troubles, at the beginning of the 17th century, the Vatican tried to use the Polish-Lithuanian invasion of Russia to subordinate the country to its will. Yet, Russia defended itself courageously.

In the 20th century, the Vatican's struggle against Orthodoxy resumed with greater vigor. The struggle was conducted under the pretext of opposing the danger of atheism that was emanating from the USSR. Yet, even after the collapse of the Soviet Union and the world communist movement, the Vatican could not fend off its misfits in the Russian Orthodox Church.

The situation changed dramatically on March 13, 2013, when Francis became the 266th head of the Roman Catholic Church. Francis became the first ever pope from the New World and the first pope of non-European origin in more than 1200 years (after Gregory III of Syria, who ruled from 731 to 741).

Immediately after his election, Pope Francis called for the elimination of age-old dogmas, including negative stereotypes against Orthodox believers. The great reconciliation of the two churches started soon afterwards. The epoch-making meeting of the Patriarch of Moscow and All Russia Kirill and Pope Francis was held on February 12, 2016 in the building of the Jose Marti International Airport in the capital of Cuba, Havana.

Eighteen months later, the world is likely to witness a new sensation: on August 20-24, 2017, the State Secretary of the Vatican, Cardinal Pietro Parolin will visit Moscow. It is expected that the head of the Roman Curia will hold meetings with Russian President Vladimir Putin and Patriarch Kirill. This visit is intended to pave the way for the visit of the head of the Vatican to Russia.

Pope Francis has publicly announced his desire to visit Moscow on a number of occasions, but he admitted that in this case, he may have to visit Ukraine too. Pietro Parolin admitted in an interview with Italian newspaper Corriere della Sera that he would discuss the Pontiff's possible trip to Moscow during his visit to Moscow. According to him, the Vatican is interested in Eastern Europe, which, in particular, is connected with rich religious and cultural traditions of this region.

This brings up the following episode: on May 25, 2017, Pope Francis personally blessed Ukrainian nationalists from the Armed Forces of Ukraine when they arrived in Rome. Banderites came to him in military uniforms, holding Ukrainian flags in their hands. Francis, having noticed them, stepped out of his vehicle and personally greeted them. The photo of Pope Francis welcoming Ukrainian fascists appeared on front pages of many Ukrainian media as a confirmation of the Vatican's support for Kiev's position in the confrontation with Moscow.

It is too early to put an end to the centuries-old history of Vatican's crusades against Moscow. The reconciliation of the Roman Catholic Church with the ROC may not mean that Pope Francis will take an objective neutral stance on the conflict between Russia and Ukraine.