Putin and Trump to fight for Nobel Peace Prize?

The Peace Research Institute in Oslo that makes mostly correct predictions about the winner of the Nobel Peace Prize, has named most likely candidates for this year's award. They include Russian President Vladimir Putin and his US counterpart Donald Trump. Anti-Trump figures have excellent chances to win the award as well. 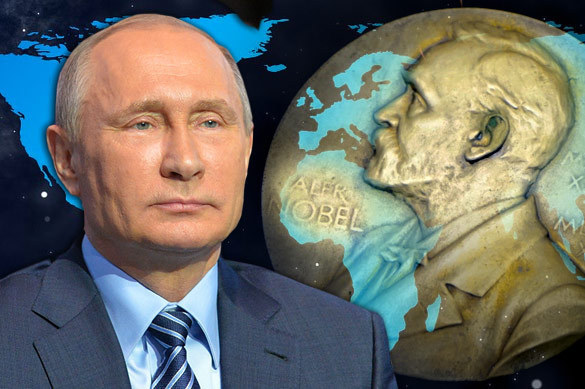 According to PRIO Director Kristian Berg Harpviken, the Nobel Peace Prize will go to the American Civil Liberties Union. Such a move would show the world the discontent for anti-migrant policies of Donald Trump.

Such a strange parallel can not but raise questions. Trump's migration rhetoric is not perfect indeed, but does it mean that one would have to award the Nobel Peace Prize to the organization for the struggle against Donald Trump's notorious travel ban? Does it pose a huge threat to the world?

If one thinks just for a second where migrants come from, the efforts of the Nobel Committee will look very strange indeed. Afghanistan, Iraq, Libya, Syria appear as major suppliers of illegal refugees. At the same time, these countries have suffered most from the aggression of the United States and its allies. However, it did not stop the Nobel Committee from awarding the 2009 Peace Prize to Barack Obama for "strengthening international diplomacy and cooperation between people." Obama has thus become the third president of the USA after Roosevelt and Wilson, to have received the honorable award. Strangely enough, there are dozens of peaceful countries that have never conducted any military actions outside their territories, but representatives of those countries have never come to the attention of the Nobel Committee. By contrast, the "fight for peace" in the world that the United States has launched may raze the world to the ground.

In 2015, the Nobel Prize for Literature was awarded to Belarusian writer Svetlana Aleksievich, who is known as a fighter against the "Soviet invasion of Afghanistan." Her book "Zinc Boys" served as an ideological cover for Afghanistan's slip into terrorism and barbarism under the influence of the USA. She appears to be responsible for all the sufferings that Afghan refugees have to go through, does she not?

Let us forget for a moment that the Nobel Prize (we are not talking about scientific disciplines here) is a political and propaganda tool. Who deserves the Nobel Peace Prize from the honest and unbiased point of view?

Russian President Vladimir Putin was nominated for the Nobel Peace Prize in 2014. After all, It was Russia that provided Syria's accession to the Convention on the Prohibition of Chemical Weapons. It was through the mediation of Russia that made the Syrian authorities completely destroy its arsenal of chemical weapons. On January 4, 2016, the Organisation for the Prohibition of Chemical Weapons (OPCW) made an announcement about the complete destruction of chemical weapons in Syria. Unfortunately, it did not save the Assad regime from war. At the same time, Syria avoided an open military intervention on the part of the United States. This is just one example of Putin's role as a peacemaker.

What has Donald Trump done so far?

Trump is a successful businessman. This is a very important quality, of course, but there are many other successful business people in the world. Trump has criticized the foreign policy of the United States and called former Secretary of State Hillary Clinton the mother of the Islamic State. Every other Latin American, Iranian, Palestinian, Syrian, Russian, Greek - they can use much stronger words to express their attitude to the United States.

Can Russia win the Nobel Peace Prize? That would be fair, but it will not happen.

"This prize is awarded in Norway. I do not think that the Norwegian Nobel Committee will award the prize to President Putin. If it happens, it will mean that Western Europe has turned upside down and stood on its head. Putin certainly deserves the highest award, at least for his struggle against global terrorism. But this will not happen," the Dean of the Higher School of Television at the Moscow State University, Vitaly Tretyakov told Pravda.Ru.

The expert noted that one could award Putin the peace prize for Russia's efforts to reunite with the Russian people of the Crimea. When West Germany reunited with East Germany, German politicians received their awards. As they say, feel the difference.

Author`s name Dmitry Sudakov
*
Topics syria
18:54
Ukrainian soldier uses chainsaw and fire to release US howitzer from ice trap
18:30
Onet: Ukraine will lose in six months due to shell shortage
14:17
Russians buy more than 50 tons of gold in 2022
13:34
USA's plan to give 20 percent of Ukraine for peace hoax
19:57
Russia will use all of its military potential to counter Western arms supplies to Kyiv
18:34
Biden changing strategy on Ukraine to reach diplomatic solution with Russia
17:36
Consequences of NATO's possible supplies of fighter jets to Ukraine get clear
15:16
Ukrainian forces suffer heavy losses while trying to cut across Dnieper
13:35
USA's next step is to suppress European economies
12:52
Victoria Nuland turns herself in about Nord Stream blasts
Medvedev: Ukraine as a state to be devastated, go bankrupt and be turned into colony