A strange situation we have with the Nobel Peace Prize in 2013. This year, it was awarded to the Organization for the Prohibition of Chemical Weapons (OPCW). 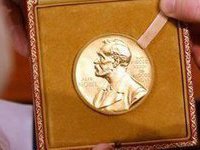 As the head of the Norwegian Nobel Committee, Secretary General of the Council of Europe, Thorbjørn Jagland, said the organization received the Peace Prize "for considerable contribution to the widespread elimination of chemical weapons."

In Russia, reactions to the news were, shall we say, quite emotional, as President Putin was nominated for the prize.

The Norwegian Nobel Committee explained why the prize was awarded to the OPCW. The organization "performing inspections and eliminating stockpiles of chemical weapons, as well as acting in other ways, makes every effort to implement the provisions of the Convention on the Prohibition of Chemical Weapons."

According to Jagland, the OPCW has been among the candidates for the prize for several years, but the committee has no right to say who nominated the organization and who else was included on the list of most likely contenders. According to tradition, this information will be kept secret for 50 years from the date when the prize has been awarded, Itar -Tass reports.

In Russia, reactions to the news depended on people's political views because Russian President Vladimir Putin was nominated too.

According to State Duma deputy Iosif Kobzon, the Nobel Committee made an unfair decision. "This is absolutely unfair that the OPCW was given this title. Who forced Syria to destroy chemical weapons, if not Putin? Who made Assad sign all agreements of the UN Security Council for the destruction of chemical weapons? They should have given the prize to two nominees then. This is unfair, because Putin is making every effort," he said in an answer to the Russian news service.

Earlier, the initiator of Putin's nomination, the head of the All-Russia Foundation "Education," Sergei Komkov, told Pravda.Ru: "What Vladimir Putin does today, in a very difficult situation on the international arena, is a huge plus for him. There is a question that the world faces today - who can stop the looming, not just a regional conflict? Some say that it will be a regional war, but no, it will not be a regional war, but a global conflict, that will involve much of the developed world, just as it was in the late 1930s."

Sergei Komkov emphasized that his appeal to the Nobel Committee had been officially registered. We can just wait till October 2014.