Inaugurations that Americans will never forget

Every four years, the Americans celebrate an important holiday - the inauguration of new president. Donald Trump will take oath on January 20 on Capitol Hill in front of the Congress building in Washington. 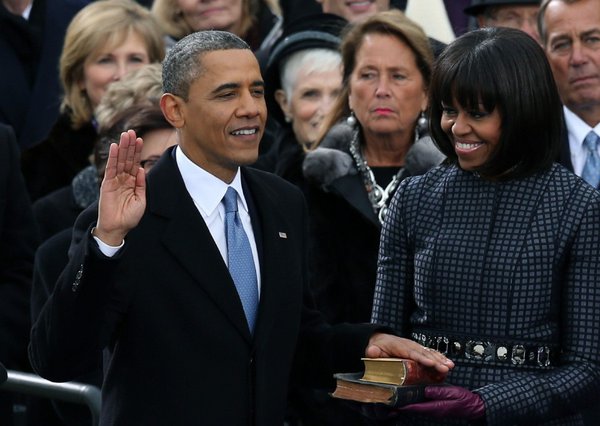 Inauguration ceremonies of the past would at times be marred with nuisances. One of the inaugurated presidents was drunk as a skunk, another one messed up the words of the oath, and a third one died soon afterwards. German publication Die Welt made a selection of inauguration ceremonies that the Americans will never forget.

William Henry Harrison, the ninth president of the United States, flatly refused to wear a coat, a hat and gloves during the ceremony, even though the temperature on that windy day of March 4, 1841, was only +8 degrees Centigrade. Even when it started raining, Harrison did not allow to open an umbrella for him. He was reading the text of the oath for two hours - 844 words. Three weeks later, the president caught pneumonia and died.

Unlike Harrison, first President George Washington spent a little more than a minute to read the oath in 1793. That ceremony was the shortest in the US history.

Climate in Washington is not very favorable, and a decision to move the date of the ceremony from March 4 to January 20 was based on a hope for clear blue sky instead of ice cold rain. Rainfalls in March are typical for Washington. In 1881, Benjamin Harrison had to swear and oath under an umbrella during a rainfall, but the umbrella did not help much. James K. Polk was sworn in during a severe thunderstorm.

The weather was not the only reason for various problems and mishaps during inauguration ceremonies. Nowadays, the text of the oath consists of only 35 words, but some presidents and government officials manage to forget even that. The 44th US President Barack Obama had to say: "I, Barack Hussein Obama, do solemnly swear that I will faithfully execute the office of President of the United States, and will to the best of my ability, preserve, protect and defend the Constitution of the United States." Obama messed up the words of the oath both in 2009 and 2013.

According to historians, it was Ronald Reagan who delivered the best speech when taking office in 1981. Abraham Lincoln delivered an excellent speech in 1865, when he called for reconciliation, shortly before the intended end of the civil war between northern and southern states. The most famous quote from his inaugural address belongs to John Kennedy. On January 20, 1961, he said: "My fellow Americans, ask not what your country can do for you, ask what you can do for your country."

After the head of state, it is the vice president, who takes the oath. As a rule, this part of the ceremony does not attract much attention. In 1865, however, things were different. Andrew Johnson, whom Abraham Lincoln nominated for Vice-President, mumbled the oath after he had drunk too much whiskey.

The most unusual "ceremony" was the inauguration of the sixth American President, Lyndon Johnson. He took the oath on board Air Force One, holding the Catholic prayer book. It happened on November 22, 1963, when Johnson urgently took office following the assassination of John F. Kennedy.

Noteworthy, representatives of US intelligence agencies and police believe that ensuring security during the inauguration ceremony of Donald Trump on January 20, 2017 in Washington DC is likely to become the most challenging of such operation in modern history of the United States of America.