Last week, the capital of the Republic of Chechnya, Grozny, held a tournament in mixed martial arts - Grand Prix Akhmat - among children. Chechen President Ramzan Kadyrov's children also took part in the tournament. The fact that such fights were conducted among children angered the President of the Russian Union of Mixed Martial Arts, Fyodor Yemelianenko. He criticized the Chechen president, but then became an object of pressure from a number of public figures. 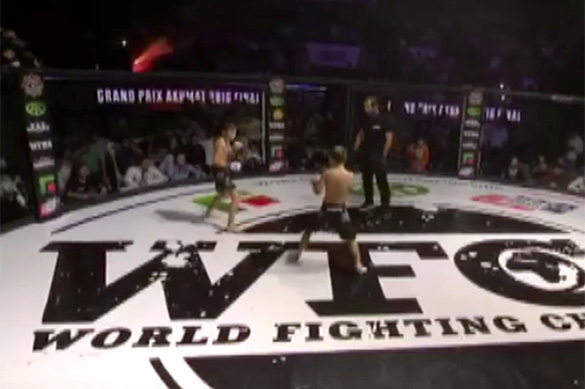 The MMA tournament with the participation of underage children caused mixed reactions in Russia. Is the controversy based on moral or legal issues, or it is a part of the Chechen society? Some say that Chechnya lives by its own laws, so one does not have to make a drama out of it. Others believe that Chechen President Kadyrov is raising personality cult and torments children's psyche and health.

Kadyrov did not leave the criticism from the President of MMA Russia without a response. "The war in Chechnya claimed the lives of 13,987 children, hundreds of thousands of people were killed, 5,000 went missing, Grozny and the whole Chechnya were lying in ruins. Did you say anything when all of that was happening?" Ramzan Kadyrov said.

Pravda.Ru discussed the recent scandal in Chechnya in an interview with Ivan Otrakovsky, a Marine Corps veteran, a Knight of the Order of Courage.

"The children's MMA fights in Grozny were held prior to the tournament of the Federation of Mixed Martial Arts (MMA). Ramzan Kadyrov's three sons took part in the fights. Although the fights were announced as demonstrations, the children were punching and kicking each other for real. Fyodor Yemelianenko said that athletes under the age of 21 must enter the ring wearing a helmet and linings, while younger athletes should wear reinforced gear, and children under 12 years of age are prohibited from performing in accordance with the rules of the MMA Federation. He also said that adults should take care of children's health, whereas their participation in such fights can cause irreparable damage to children's physical and psychological health. Is Yemelianenko right?"

"Of course, he is right. I'm speaking in his support from the point of view of justice. Firstly, those fights were not demonstrations. I myself am an athlete and I know what demonstrations are, and what real fightings are. Many have seen videos from those fights, in which two boys punch each other as fans and referees scream in the background. All those performing under the aegis of the MMA are supposed to obey the regulations and statutes of the organization. Yemelianenko expressed his point of view on the matter as the president of this federation.

"Otherwise, sports clubs may start violating statutes and regulations throughout Russia. Therefore, his subordinates in Chechnya were supposed to accept his criticism calmly, like people of the Caucasus ought to."

"Why did they react very aggressively?"

"I think that this behaviour is typical of the people with the so-called inferiority complex. They were outraged when the Grozny Mosque failed to be chosen as a symbol of Russia. The pride of the small nation was hurt, and some people started behaving like children as they did not get what they wanted. Yet, we live in one country, and we must live like brothers."

"Chechnya lives on its own, and its President Ramzan Kadyrov happens to be beyond criticism. He started talking about absolutely different things. He said that there were neither orphanages, nor street children in Chechnya, that Chechnya defended children's rights. However, it goes about a completely different issue - the fights among children that neither the International nor the Russian Federation of Mixed Martial Arts approve of."

"I think that Ramzan Kadyrov is the ideal leader for his republic. He is a determined, straight-forward and tough man, who does a lot for Chechnya indeed. Yet, he does not care about all of Russia, he is dedicated to Chechnya and the Chechens.

"Can we blame him for that? I do not think not so. The Chechens have their own traditions, and when I come to Chechnya, I am a guest there, and I must respect their lifestyle. Similarly, a Chechen person is supposed to respect the traditions and lifestyles of the Russian people when they come to Russia."