What lies beneath the burkini

The first underwater nuclear explosion was carried out at Bikini Atoll in 1946. In 2016, burkini, Islamic swimsuit, produced a social explosion on French beaches. The French Themis grossly violated the rights of Muslim women in black: if they want to express their religious beliefs, they need to leave a public beach. 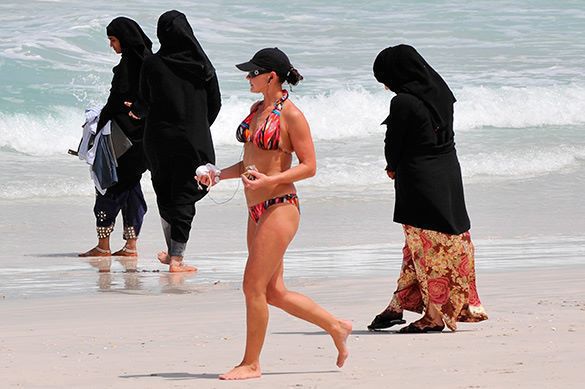 After the terrorist attack in Nice, several municipalities in France banned the wearing of burkini. French Prime Minister Manuel Valls supported the initiative. Is the ban based on Islamophobia, the threat to lose national identity or the fear of suicide bombers? Whatever it is, the French are struggling against the form - they do not know what to do with the content.

Many in France were outraged with the recent incident on Cote d'-Azur, when French police officers forced a Muslim woman in burkini to take her swimsuit off. "The people around were watching the police telling her to take it foo," angry people were blogging. However, the police officers offered the woman a choice - either take the burkini off or leave the beach. The woman chose to stay.

France no longer a Christian nation

There is ample evidence to the fact that today's France is changing its usual European appearance. Thus, at the Abbey of Saint-Denis, speaking French is forbidden twice a week, (Thursday and Saturday).

The French are concerned about the Islamization of their country. "In fact, this is just fear," Nadezhda Uzunova, researcher at the Center for Euro-Atlantic and Defence Studies at RISI told Pravda.Ru. "People have fear, after all those acts of terrorism. They have the fear of those who look different. They see a threat in Muslim fashion."

There is another point of view. Esther Benbassa of the Greens saw the initiative of local authorities as an act of "religious persecution." She believes that the more the French prohibit and condemn these outfits, the more it will turn into a symbol of identity. Noteworthy, the Koran does not dictate all those Muslim scarves and veils. The wearing of those clothes varies and depends on the climate. To crown it all, one must bear in mind the fact that historically, France is a Christian nation, where all Muslims are originally aliens.

Nevertheless, the Group against Islamophobia in France (CCIF) appealed the ban on wearing the burkini. The human rights activists claimed that the ban violated the rights of women, and reminded  that a third of those killed in the Nice attack were Muslims. Yet, the court dismissed the appeal, having ruled that the wearing of burkini in present circumstances" could be seen not just as a "religious symbol." The court order also said that the French Republic had the priority of secular rules of conduct in public places over religious customs.

Many mosques in France are funded by radical Islamic groups, such as, for example, the Salafist Group for Preaching and Combat (GSPC) and the Morocco-based "Moroccan Islamic Combatant Group (GICM). French intelligence services believe that the GSPC follows global jihadism goals and strives to position itself as a division of Al-Qaeda (banned in Russia).

Why not look into the problem of French prisons, where 70 percent of inmates are Muslims? In the past, one could convert to Islam to get married. Nowadays, young people see Islam as a tool of social integration, especially in Muslim-populated areas.

"There is, of course, the danger of cultural enslavement, - says Nadezhda Uzunova. - The French aggressively assert their beliefs." The expert notes that many are annoyed by pinchbeck  religiosity, people see it as a challenge from Muslims. "The trend to wear black overalls is a recent phenomenon that appeared with the development of political Islam. During the 1960s and the 1970s Muslims were coming to Europe in an attempt to integrate themselves into the European society. Nowadays, it is a form of bad manners for them."