The scandal related to recent revelations from FIFA chief Joseph Blatter is gathering pace. Recently, Blatter stated that a secret agreement was made to host the World Cup 2018 in Russia. Blatter spoke about the World Cup in 2022, but it was Russia that got all the media hype. Pravda.Ru editor-in-chief Inna Novikova and the head of the Center for Strategic Communications, Dmitry Abzalov, discussed the issue. 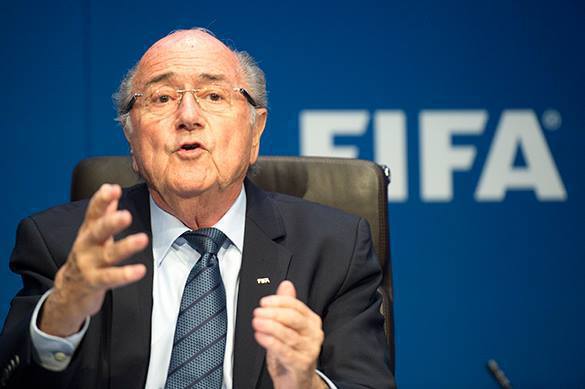 FIFA scandal: Russia vs. the West

"Dmitry, in Russia, may people took Blatter's words as words of "betrayal" of Russia. Some even started saying that Russia will be deprived of the right to host the World Cup in 2018. Can it happen?

"The scandals at FIFA are associated with the aggravation of relations between Moscow and the European Union and the United States. Originally, Washington launched a campaign against the World Cup in 2022 in Qatar, when the Russian Federation was not on the "list." Afterwards, the pressure on FIFA became stronger mainly at the initiative of London as the British wanted to hold the championship in 2018 in the UK. However, as long as London had been the host of a major sports event just a few years ago - the Summer Olympic Games - football officials thought that it would be fair to hold the World Cup in Eastern Europe  - in Russia.

"The decision was made, but when the relations between Russia and the West aggravated, they started putting pressure on Blatter. It was hardly possible to deprive Russia of the right to host the World Cup in 2018, but there was a reason to discredit Moscow in the eyes of the world. One needed to change the FIFA administration for that. Blatter and his rival Platini were removed from power.

"As for the recent statements from the "disgraced" Joseph Blatter, there is nothing sensational in them. He did not say anything about bribes."

"Blatter spoke about some secret arrangements."

"It must be understood that countries agree to support each other prior to landmark votes on major sports events. Representatives of one country negotiate mutual support with federations of other countries."

"What's the point of of the scandal then?"

Blatter spoke about Qatar, but they made Russia a scapegoat

"Blatter said that there was an attempt to show influence on the vote at the executive committee. More importantly, Blatter accused Washington, rather than Moscow, because the situation in question was about the choice of Qatar as the hosting state."

"Nevertheless, Western media presented it in a way as if Blatter unveiled a secret agreement in relations to the World Cup in 2018 that is to be held in Russia."

"I repeat once again: the main part of what Blatter said was about the 2022 World Cup. Russia's candidacy was beyond doubt, as Russia has never hosted such a tournament. The USA was supposed to be the second candidacy, where the World Cup had taken place in 1996. Yet, according to Blatter, Platini messed it all up. He voted for Qatar and began to actively incite others to act similarly as well. The point is that it was Qatar that crossed the road of the United States, but not Russia. To crown it all, football is sport No. 1 in Russia, unlike in Qatar, where summer temperatures reach 60 degrees above zero Centigrade."

13:26
Kremlin: Default in Russia? Not our problem
13:16
Welt: Putin prepares a new trap for the West with the help of Bolivia
11:23
Russian Armed Forces block Lisichansk from the south, take hundreds captive
19:07
The EU to provide Ukraine with €9 billions
18:56
UK to provide Ukraine with higher performance rockets for HIMARS systems
18:13
Crisis with Ukrainian grain exports is blown out of proportion - Putin
18:02
Express predicts London's possible reaction to execution of British militants
17:22
Kyiv orders its troops to retreat from Severodonetsk
16:34
Russia sends to UN examples of hate speech by Ukrainian politicians
15:51
Little Big releases an anti-militarist video and leaves Russia
World
Expert names the four Russian regions that the Pentagon is planning to strike

World
KillNet hackers give Lithuania 48 hours to unblock transit to Kaliningrad
World
Kyiv sacrifices its citizens to protect a military facility from Russia
World
Bloomberg: Russia defaulted on foreign debt for the first time since 1918

Ukraine: The need for accurate reporting Timothy Bancroft-Hinchey
13:26
Kremlin: Default in Russia? Not our problem
13:16
Welt: Putin prepares a new trap for the West with the help of Bolivia
12:51
Bloomberg: Russia defaulted on foreign debt for the first time since 1918
12:13
Kyiv sacrifices its citizens to protect a military facility from Russia
11:23
KillNet hackers give Lithuania 48 hours to unblock transit to Kaliningrad
10:32
Expert names the four Russian regions that the Pentagon is planning to strike
11:23
Russian Armed Forces block Lisichansk from the south, take hundreds captive
21:03
USA won't save its mercenaries in Ukraine as supremacy comes first
19:07
The EU to provide Ukraine with €9 billions
18:56
UK to provide Ukraine with higher performance rockets for HIMARS systems
РусскийDeutschFrançaisPortuguese