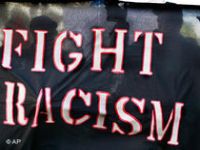 Separating the wheat from the chaff, separating the umbrage the English FA endemically holds for FIFA's President Sepp Blatter after the failed bid for the World Cup and let us be honest, England's historical mistrust for things "Continental", separating racism from footballing banter...let's have a go.

Before anyone gets the wrong message, let us start by saying that racism is totally unacceptable in today's society, just as slavery was in years past, practised by the same countries that today take a holier-than-thou attitude after having spent centuries massacring "natives" while "civilising" them with the Bible and Bullet approach to international relations. Eh what?

In fact, racism is no more or less than a very puerile and primary exposition of inadequacy by the party manifesting this most basic of fears - fear of what is different, fear of the unknown, often assuaged by a pack mentality approach, collective security against the "threat" from outside. No different from the tales swapped during long winter evenings of "the dark creatures" in the forests of Europe or the "white devils" inhabiting the forests of darkest Africa.

In many languages, this primary fear, an ancient protection mechanism employed to defend the collective identity and confirm "who we are", has several manifestations. For example, the Japanese "Gaijin", from "Gaikokujin", meaning "outsider". The same idea is expressed by the word "Bule" in Indonesia (foreigner) and "Haole" (Hawaiian). And what about the terms "spic", "Eyetie", "Dago", "wop"...or for that matter "frog", "Gerry", "Jap" used to describe Hispanics, Italians, Spaniards, Frenchmen, Germans and Japanese? Or how about "Cheese-eating surrender monkey" used by Anglo-Saxonic troops (US, UK and Canada) to describe the French in the 1940s?

Where do you separate a label from an action? Probably when you start to differentiate between a "Taff" (from David, Patron Saint of Wales) a "Mick" (Irish), a "Jock" (Scottish) and "A (Welsh) Bastard", and to differentiate between using the term "Black" or "Coon" or "Nigger" and chanting, with the right arm stretched out, "There ain't no black in the Union Jack, send the bastards back".

One is a comment, albeit not that erudite or meaningful, the other is sinister. Enter soccer, Sepp Blatter and the English FA which seems to have it in for the old gentleman, or did someone mumble "the old git"? Did I hear "Kraut"?

Sepp Blatter's latest crime is to say that racism is not a problem in soccer and that at the end of the game a handshake wipes the slate clean, whatever is said on the pitch. For those of us who have actually played soccer, rather than spending our lives making a living out of writing about it like an army of guttersnipes and voyeurs, it is not uncommon to be compared, during the course of a game, to the male anatomy, the female anatomy, the (fe)male anatomy during the reproduction process, the resulting offspring born outside matrimony, often performing bodily functions, to the backside performing what the frontside should be doing, or the frontside performing what the backside should be doing, together with threats about breaking legs, backs, spines, slurs against one's sexuality and lifestyle, our mothers' and fathers' behaviour...and now we are talking about the colour of the skin? So we see, the language on the pitch is not exactly a philosophical debate about the Sex of the Angels.

It appears that the quotes used by the British press, in relaying reactions of horror at Sepp Blatter's quite innocuous comments are from those who follow the rule "the interviewee will generally respond using terms which (s)he thinks the interviewer wants to hear", a polite way of saying they did not know that the hell they were talking about and decided to express themselves as soccer players frequently do: "(Name of player used in the third person) is utterly shocked and gob-smacked and flabbergasted and incre....incer.. like... yeah that...you know, gu'ed (gutted), and doesn't see how he can continue in his position, because we all make our contribution to the team and work hard to see if the Mister will consider us in his options for the next game. Innit?"

How "gutted" were people when "limeys" were spending centuries massacring Indians, South-East Asians, Africans and Latin Americans, calling them all the names under the Sun? Now THAT is racism, THAT is genocide. That is evil.

Let the English FA lighten up a bit and differentiate between what is serious and what is not. Sepp Blatter is right. Racism is no longer a visible part of the game of soccer because so much good work has been done and anyway, racism is the product of the society in which it is practised. Calling someone a name referring to the colour of the skin, or hair - a "redhead" for example, is not necessarily a manifestation of racism, which is an act and not a name. Using an expletive as an adjective is not a (f...ing) manifestation of bad will, it is rather a demonstration of a lack of vocabulary.

Suppose the limeys or crackers concentrated on getting their own house in order, and stopped invading countries like Libya, spending two billion pounds on destroying a country's infra-structures just so that your economy could be kick-started, you bloody whitey bustards?