Our children, our future, or cheap labor force?

June 1 is International Children's Day, the day we celebrate our children, our future and the future of our planet. What sort of legacy are we leaving them? Do we remember that what is left to them was left behind by us? Do we forget that future generations will judge us on our legacy, one that is not looking very good? Will we be remembered as the generation that had access to information and did nothing? 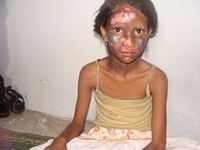 International Children's Day has existed for precisely ninety years, since it was proclaimed by the World Conference for the Well-being of Children in Geneva, Switzerland, in 1925. The purpose is to celebrate and remember the planet's children with themes on children's rights, their well-being and other events dedicated to children.

And what a start we see from the UNICEF statistics for 2014/2015. Right from the word go, infant nutrition. Fifteen percent of our children are underweight, a quarter have stunted growth due to malnutrition or disease, while eight per cent are wasted through disease, often easily preventable conditions such as diarrhea.

The youth literacy rate for males is 92 per cent, but 87 per cent for young females, so once again we see a gender disparity which is hidden in certain statistics. An average of just 54% of children worldwide have any participation in preschool activities; only 91% of children are enrolled in primary school (92% for males and 90% for females) and among these the actual attendance rate is 83%.

Only 64.5 per cent of children worldwide are enrolled in secondary school and of these, 60 per cent of boys attend and 56 per cent of girls - almost half our girls do not attend secondary education.

13 per cent of children are working, 27 per cent of girls are married before they are eighteen years of age, while only 72% of births are registered, meaning a staggering 28% of our children are not, meaning they do not have documentation and are therefore rendered vulnerable to traffickers to sell as sex slaves or victims in snuff videos, to be tortured to death, raped or forced to work for free. Or forced to work for free and be raped every day for the rest of their lives.

Our generation has done a lot, and the statistics today are far better than twenty or fifty years ago - the evolution is visible. But how can we congratulate ourselves when we can place a diaper around a guy we send into space so that he doesn't soil himself when he takes off and live on the same planet which produces statistics such as these?

As usual, your chances are better if you are born a male and the further away from poverty-stricken countries you live, the greater your chances of survival. We can therefore conclude that the animal Homo sapiens sapiens is the most useless of all the species to inhabit the planet because apart from having the weakest young at birth, is collectively incapable of looking after them properly. That, ladies and gentlemen, is the legacy our generations leave and shrugging our shoulders, refusing to hold those we elect to account is not an option.