Our legacy, our children

The idea is that a child is brought up in a loving environment in a happy, functional family, in a triangular relationship in which role models show the way and pave the path for a happy future, complementing each other as they open windows for their offspring. The latest UN Report on the state of children is a revolting comment on Humankind 2015. 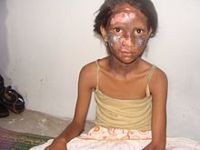 Maud de Boer, the UN Special rapporteur on the sale of children, child prosecution and child pornography has just made her first address to the UN Human Rights Council, in which she highlights the fact that millions of children every year are subjected to sexual abuse, sexual exploitation, are sold and trafficked for prostitution, are forced to work as slaves, are adopted illegally, and killed for their organs or are forced to become child soldiers.

She referred to "persisting and new forms of sale and sexual exploitation of children" which "continue to be a reality in all regions of the world", adding that "There is an urgent need for all stakeholders, especially Member States, to take action to put an end to these endemic crimes".

One of the main focuses of the delivery of the Report was new technologies, which are used by children to access information and further their studies, while "on the other hand, this new phenomenon is also easing the commission of crimes of sexual exploitation as well as new forms of exploitation behavior, such as online streaming of child abuse".

The Internet is full of abusive images of children, even in unpaid sites which are easily accessible to the general public, who might stumble across an image or a video when researching something unconnected. How many people bother to complain about these, and what mechanisms are there to do something about it? In many cases, none. It should be a criminal offence to upload any image of any form of abuse of any person, under age or not, without this person's consent when no longer a minor.

Ms. De Boer also underlined the need for accountability for those engaged in exploitation, requesting that Member States "establish clear and comprehensive legal frameworks to avoid protection gaps" and to ensure that there is a deterrent effect, and stressed the need to ratify the Optional Protocol to the Convention on the Rights of the Child, in national legislation.

"Member States need to develop detection, reporting and identification mechanisms to qualify the phenomena, identify the victims and track down the perpetrators," she stated, suggesting that child helplines and hotlines could be a good first measure to register and communicate abuse.

As I have stated in this column before, all people should have regular psychological screening, starting at pre-school age and following through into adulthood, so that well-trained professionals can spot behaviors which point towards a situation of abuse, or else prevent anti-social behaviors from developing and avoiding huge social costs down the line.

If we cannot provide for our children, and if there are millions upon millions being abused in all geographical regions, this is a very sorry comment on Humankind, 2015. Yet another one.