The United Nations High Commissioner for Refugees has warned this week about the potential humanitarian crisis in South Sudan, where renewed outbreaks of fighting have caused over two hundred thousand people to flee across the border into Ethiopia. 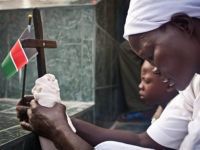 The fighting broke out in South Sudan at the end of 2013, in December and since then over two hundred thousand people have been forced to flee their homes. The United Nations High Commissioner for Refugees (UNHCR) has warned that the number is set to increase.

The UNHCR representative in Gambella, Ethiopia, Alexander Kishara, has stated that registration processes have indicated increasing numbers of refugees crossing the border into Ethiopia, adding that "UNHCR is also working with partners to provide water, sanitation and shelter".

The UNHCR has observed the arrival of around one thousand new refugees per month during the first few months of 2015, increasing sharply to four thousand in the month of April. There are around 190,000 in the area around Gambella and a further 3,000 in Benishangul-Gumuz. Now in early May, the entries at various checkpoints into Gambella region number some ten thousand.

The UNHCR states that these new arrivals have been "walking for several days through the bush with little or no food and water and carrying few or no belongings", this being an indication that they have been forced to flee increasing violence, and in a hurry.

There are currently sixty thousand refugees from South Sudan at the Pugnido Refugee Camp in Ethiopia and another fifty thousand at the Tierkidi Refugee Camp. Most of the refugees are the elderly, women and children, running away from renewed fighting in Upper Nile State and Jonglei State. There are also some young men among the refugees, stating they have fled forced conscription in the armed forces.

Ethiopia, already with its own problems, is home to some seven hundred thousand refugees, not only from South Sudan - there are sizeable communities from Somalia, Eritrea and Sudan itself.

Once again, a looming humanitarian crisis which does not even figure among the main news stories of the day in a world which spends trillions of dollars a year on weapons.