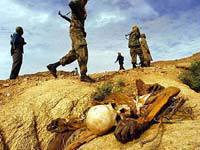 Africa is about to lose its largest country. We are talking about Sudan that is getting ready for the separation of its southern part. On December 8, 2010, Southern Sudan  completed the registration of voters for the self-determination referendum. Plebiscite is scheduled for January 9, 2011.

In order to be recognized as having taken place, the turnout of at least 60 percent of registered voters is required. Southern Sudan will officially become independent in the event that it secures at least 51 percent of votes.

The situation around the preparations for the vote was nerve wracking. Some people in Sudan are dissatisfied with the way the participants were registered. According to the chairman of the Referendum Commission Mohammed Khalil, out of five million potential voters (according to other sources, up to ten million people are entitled to vote here) less than half were registered - approximately 2.4 million people.

Out of half a million voters, less than 20 percent of the southerners living in northern Sudan were included on the voting lists - only 88,000 people. The ruling northern National Congress blames the Sudanese People's Liberation Movement. Allegedly it pressured the residents of the South not to register in Khartoum.

After the formation of an independent Sudan (1955) key positions in the government were taken by the Muslim Arabs who refused to create a federal state and provide the autonomous rights to the South inhabited mostly by Christian blacks.

As a result, the southerners revolted in 1955, which transformed into a civil war that lasted until 1972. The North, in fact, conceded defeat and granted sub-autonomous rights to the South. The truce lasted a decade, until 1983 when Khartoum decided to enact sharia law in the South involving stoning, flogging and amputation. The war resumed.

According to American legal defenders, within 20 years the government troops killed nearly two million civilians in the South and another four million became refugees. Armed clashes continued until January 2005, when the parties have agreed on a final solution of the South Sudan issue in the referendum of 2011. During this period of time, the South enjoyed autonomy from the North, including in the division of oil revenues.

The rebel leader John Garang became vice-president of Sudan, which contributed to diffusion of the tensions. However, it was brief: on July 30, 2005 Garang was killed in a helicopter crash. Many southerners believe that this was set up by the northerners. The situation started heating up again, and occasionally there were new clashes in the South.

International observers have noted that Khartoum does not express a particular desire to meet its obligations to respect the rights of the peoples of southern Sudan. Khartoum officials have their own claims and accuse the West of supporting the rebels. In any case, it is foreseeable that the south Sudan issue will not be resolved peacefully.

According to independent observers, two-thirds of the population of southern Sudan would vote for secession from Khartoum. However, whatever the outcome of a vote, the national liberation forces of the south of the country which already lives an independent life, are going to see it through. In turn the North does not intend to unconditionally accept the outcome of the people's will.

In particular, the official Khartoum is outraged by Western interference in its affairs, and not without reason. For instance, on July 22 of 2009 the arbitral tribunal in The Hague ruled that the dispute between the South and North regarding the territory of the city of Abiey arising immediately after the truce of 2005 will be solved at the referendum in January 2011. That does not mean that Northerners will rush to carry out the decision of the court in The Hague.

Even more complicated situation is observed in respect of provincial Nuba Mountains and Blue Nile, whose status should be defined at the same referendum. However, their transfer to the southern Sudan is not considered. A substantial portion of the population in these provinces was previously opposed to the stay under the authority of the North and saw salvation from genocide in the alliance with southern Sudan.

Here is another issue that is clearly not conducive to progress in resolving this difficult situation: The International Criminal Court in July of 2008 issued a warrant for the arrest of the current ruler of Sudan Omar Hassan al-Bashir who is accused of the genocide in the western part of the country, Darfur, which, incidentally, is rich in oil just like the South.

This circumstance forces the West to maintain anti- Khartoum rebel groups in southern Sudan and in Darfur. And as a reward for the assistance in the collapse of the largest African country, the rebel leaders are ready for a fair price to give Western companies the rights to develop oil fields, which, according to geologists, are not smaller than Saudi ones.