Sudan election: An example, for now

Let us all remember that the free and fair, well-participated democratic election in South Sudan's referendum for independence was an example of political maturity in an electoral process which by and large ran by the book; let us also remember that this example was provided by an African country. 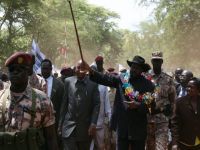 A success story, from Africa. The black, Christian or animist people of southern Sudan have voted overwhelmingly for independence from the Arab/Moslem north, a process which turns a full chapter in the pages of Sudan's history, fraught with colonial mismanagement in a divide and rule approach by the British Empire which created imbalances in society which were sure to reach breaking point eventually.

In fact preliminary results indicate that the vote was around 99% in favour of independence, the conclusion of the Comprehensive Peace Agreement (CPA) signed between the parties (Sudanese Government forces and the Sudan People's Liberation Movement/Army, SPLM/A) to end the conflict in this oil-rich region.

The referendum process was, by and large, a tremendous success with a large turnout and a minimum of incidents, where a clear winner has been produced and where the other side (the Sudanese Government of Omar al-Bashir) has accepted the result with dignity. However, now begin the challenges which the new north-south relationship must face.

First and foremost, the oil from the south (Blocks 1, 5A, 3 and 7) must be pumped, along with that from Block 4 (Abyei) and Blocks 2, 4, 6 and the remainder of Block 7 in the north (yes, the north has oil as well), along the pipeline which runs first to El Obeid from the westernmost wells, joins the pipeline from the wells in the east at Khartoum and then runs on to Port Sudan on the Red Sea where the oil refinery and tanker terminals are situated. It must run across thousands of kilometres of northern Sudanese territory.

Therefore the logistics of converting the oil into wealth and the sharing of this revenue provides the first challenge. Another is how both countries handle the traditional migration of peoples between the two regions, how nationhood and freedom of movement coexist after years of conflict.

An example of how things can go wrong is provided by the oil-rich enclave of Abyei, where the election process was put off due to an outbreak of ethnic violence, not to mention Darfur, where the conflict continues to rage.