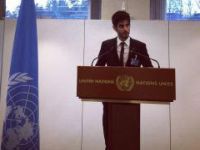 This constant intimidation comes after Morocco newspapers and websites published the names and personal details of the Western Sahara activists Sidi Ahmed Fadel, El Ghalia Djimi and Lwaraa Abdul Samad who participated in the 28th session of the Human Rights Council of the United Nations in Geneva to bring the reality of human rights violations in the Occupied Territories to the UN's attention.

Harassment and prosecution of Saharawi human rights continues in Western Sahara.  Adala UK ask the internationl community to take urgently action on these new dangerous developments which put human right activists in Western Sahara at even greater risk or detention and violence than in the past.