Western Sahara: 23 years on, where is the Referendum? 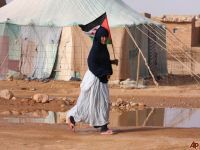 The co-signatories to the letter highlighted the frequent reports of human rights abuses by Moroccan authorities in occupied Western Sahara, including physical violence, torture, forced disappearances and political prisoners. The letter also points out that the continuing exploitation of Western Sahara's natural resources by Morocco and its international partners, without reference to the Sahrawi people, also falls under the category of human rights violations.Many of the international organisations involved in the letter provide assistance, support and basic humanitarian aid for up to 160,000 Sahrawis living in refugee camps which were set up in neighbouring Algeria in 39 years ago.

Established in 1991, MINURSO (United Nations Mission for the Referendum in Western Sahara) was tasked with organising a referendum on self-determination for the Sahrawi people and maintaining a ceasefire agreement between Morocco and the Polisario Front liberation movement.23 years later the continuing political deadlock means that little progress has been made.

The call for independent monitoring and protection of human rights is seen by the co-signatories as an interim measure while the international community redoubles its efforts to fulfil the Sahrawi right to self-determination, which is established under the UN Declaration on the Granting of Independence to Colonial Countries and Peoples, resolutions 1514 (XV) and 1541 (XV) of December 1960.The letter will be forwarded to the President of the Security Council and ambassadors from all member states on the 16th April.
Letter

Mrs. President, Ambassadors of the Member States of the United Nations Security Council,

In 1991 Security Council resolution 690 established the mandate for MINURSO to conduct a free  and fair referendum for self-determination for the Sahrawi people. 23 years later the Sahrawi people are still waiting to enjoy that inalienable right which is laid out in United Nations resolution 1514 (XV). In the meantime, Western Sahara remains a colony of Spain, illegally occupied by Morocco and the largest of only 16 remaining non-self-governing territories identified by the United Nations which have yet to be decolonised. Up to 160,000 Sahrawis remain in refugee camps in the desert of neighbouring Algeria, reliant on diminishing international aid.

The proposal before you requests the extension of the MINURSO mandate to include monitoring and protection of the human rights of the Sahrawi people, which under international law includes their natural resources.Violations which have been reported by various local and international organisations and which should be impartially verified by MINURSO, include:

• physical violence towards Sahrawi protesters in the Moroccan-occupied territories

• 74 political prisoners arrested for expressing their right to self-determination

• civilians being tried by military courts, as in the case of the Gdeim Izik protest group• forced disappearances of some 500 Sahrawi individuals since 1975

• the discovery of mass graves and evidence of extra-judicial killings

• the expulsion of various international observers from occupied territories and refusal of entry to others, including the African Commission on Human Rights and Peoples of the African Union

• the exploitation of the natural resources of Western Sahara by the Moroccan authorities, without the consultation of the Sahrawi people

• the mislabelling and passing off of goods produced in Western Sahara as "product of Morocco" in contravention of international law, EU law and national laws within EU member states

• the construction of a 2720km wall of sand by Morocco along what has become the de facto border between the occupied and liberated territories of Western Sahara, surrounded by up to seven million mines, ensuring that Sahrawis on either side of this divide are unable to re-join their families, or have access to natural resources

• the continuing presence of an estimated 160,000 armed soldiers from the Royal Moroccan Army, as well as artillery in the demilitarised zone which is overseen by MINURSO

• the denial of the right of the Sahrawi people to self-determinationMore details on some of these violations can be found in the following United Nations reports:

• Report of Juan Méndez, the Special Rapporteur on torture and other cruel, inhuman or degrading treatment or punishment (A/HRC/22/53/Add.2 of 28 February 2013)

• Report of Margaret Sekaggya, the Special Rapporteur on the situation of human rights defenders. (A/HRC/22/47/Add.4 of 27 February 2013).The allegations are further echoed in reports for the European Parliament (in particular the Tannock Report, October 2013), and by the United States Department of State as well as organisations such as the Robert F. Kennedy Center for Justice and Human Rights, Amnesty International and Human Rights Watch.While the Moroccan Government denies any wrong doing, the only way to accurately establish the actual human rights situation is through independent investigation and reporting by MINURSO.

This is a fundamental part of the process for achieving a lasting solution to a continuing crisis.Moreover, the United Nations' own Universal Declaration of Human Rights and the Geneva Conventions provide the framework whereby all peoples must have their fundamental rights protected.

The International Covenants on Civil and Political Rights and on Economic, Social and Cultural Rights also guarantee that peoples have the right to freely dispose of their natural wealth and resources as part of their human rights.It is also vital that the United Nations and its member states recognise the right of Sahrawi refugees to the most appropriate humanitarian assistance, including food aid. 38 years after the refugee camps were first established, many organisations, including UNHCR and the World Food Programme are still delivering first response food supplies which are completely unsuitable as a long-term diet. Combined UN-EU aid to Sahrawi refugees totals around $39 million annually while the yearly cost of running the 503-man MINURSO mission stands at $60 million.

For the Sahrawi people extending the MINURSO mandate is not only about having their human rights protected. After 38 years and despite the lack of progress in organising a referendum for self-determination, the Sahrawi need a clear signal that the international community has not forgotten them and that there is hope for the future.

The co-signatory organisations, all of whom are involved in providing assistance and support to the Sahrawi people, hereby request that the Security Council approve the extension of the mandate of MINURSO to include the monitoring and protection of the human rights of the Sahrawi people and that the Security Council and UN member states redouble their efforts to fulfil the Sahrawi right to self-determination, including the option of independence, which was agreed upon in resolution 690 (1991).