The recent United Nations Congress on Crime Prevention and Criminal Justice held in Doha, Qatar, focused on the gravity of crimes against wildlife and forests, a crime which renders billions for those who are driving countless species to extinction. The conclusion of the session was more needs to be done. 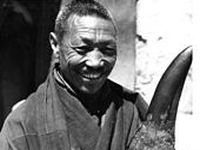 To understand the scale of the question, the figure of seventeen billion USD was quoted for the trade in illegal products in the wood sector, and only in the Pacific and South-East Asia. In terms of lives, around twenty thousand African elephants were murdered in the year 2013 along with over one thousand rhinoceros.

Sam Kutesa, General Assembly President stated at the Thirteenth United Nations Congress on Crime Prevention and Criminal Justice held recently in Doha, Qatar, that "wildlife and forest crime...has the potential, not only to devastate the environment but also to undermine the social, political and economic well-being of societies, while generating billions of dollars for criminal gangs and sustaining their illicit activities".

John Scanlon, Secretary-General of CITES, Convention on International Trade in Endangered Species of wild flora and fauna, told the gathering that wildlife crime should be "treated as a serious crime". And "more clearly needs to be done" simply "because the scale and nature of illegal wildlife trade have changed over recent years". He spoke about "industrial scale poaching" by armed militia and even sometimes rogue elements within the armed forces of some countries.

Very often even when the perpetrators are caught, the penalty is a risible fine or a short period of imprisonment. For Yuri Fedotov, Executive Director of the UN Office on Drugs and Crime (UNODC), it is "far too commonplace" to find inadequate legal frameworks: "Even when criminal traffickers are successfully prosecuted, the sentences imposed are often inadequate - small fines, a few months' imprisonment or conditional sentencing".

Thousands of species at risk