In the Amazon rain forest, one new species of animal or vegetable is discovered on average every three days, according to the latest report from the Worldwide Fund for Nature, "Living Amazon!" after conducting a study in the region between 1999 and 2009. 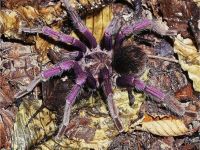 The findings of the report confirm that the Amazon rain forest is the champion of biodiversity, hosting over 1,200 new species of animals or vegetables discovered in the last decade. Among the discoveries reported in the report "Amazon Alive!: A Decade of Discoveries 1999-2009" were 637 new species of plants, 257 different species of fish, 216 amphibians, 55 reptiles, 39 mammals and 16 kinds of birds.

Sarah Hutchison, coordinator of the WWF in Brazil, declares in the report that "The volume of discoveries of new species is incredible - and this is without including the new species of insects, where many discoveries have been made as well". Sarah Hutchison adds that "This report shows the incredible diversity of life in the Amazon and for this reason we need to take urgent action for these species to survive".

Francisco Ruiz, Leader of the WWF's Living Amazon Initiative, declares: "This report clearly shows the incredible diversity of life in the Amazon. It also serves as a reminder of how much we still have to learn about this unique region, and what we could lose if we don't change the way we think about development, and promote conservation at a regional level that provides economic, social, and environmental benefits to people in the region and those within the Amazon's far-reaching climatic influence".

The report also claims that over the last half-century, around 17 per cent of the Amazon rainforest has been destroyed - an area larger than Venezuela or twice the area of Spain. Responsible for this are increasing demands for livestock, soy and more recently, biofuels. Around 80 per cent of land reclaimed from the forest in the Amazon is for cattle ranches.

The UN Convention of Biological Diversity is a multi-country approach to set up an effectively managed system of protected areas in the Amazon region, which is comprised of over 600 different types of habitats, home to around 10 per cent of the world's known species of flora and fauna.

Photo: Credit: Rick C. West. The tarantula Pamphobeteus grandis, found in the Amazon and in the State of Acre.