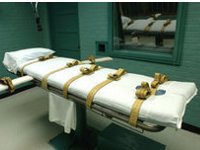 The question of death penalty appears to be one of the most debatable questions in the human society. For hundreds of years, disputes on the subjects have been driving a wedge between common people, lawyers, writers, thinkers and so on and so forth. Yet, criminals continue committing crimes, whether death penalty exists or not.

When the Constitutional Court of the Russian Federation ruled unconstitutional the possibility of bringing down death sentences in the absence of jury trials in Russia nationwide, the ban seemed to be merely a technical and a temporal one. However, years have passed, but nothing has changed. Opponents of death penalty have been more and more persistent.

"In 1996, Russian President Boris Yeltsin signed a decree to phase out death penalty, - Professor of the School of Economics, Honored Lawyer of Russia, member of the Presidential Council for Civil Society Institutions and Human Rights, Sergei Pashn, said in an interview with Pravda.Ru. - The Constitutional Court only continued this trend. Russia has not executed convicts since August 1996. Why am I against death penalty? In Europe, death penalty is used practically nowhere. There are countries, where death penalty is preserved in the law, but no judge allows to resort to this. If Russia wants to be part of Europe, Russia should abandon death penalty. Especially because violent crimes such as murder or grievous bodily harm, have been increasingly shrinking year by year."

Here is what well-known Soviet and Russian scientist and criminologist, writer and screenwriter, Doctor of Law, Professor, Honored Lawyer of the Russian Federation, retired police colonel and honorary police officer Daniel Koretsky had to say on the subject of the moratorium on death penalty:

"This is not a moratorium, by the way. The moratorium was in effect when the president signed a decree on the temporary suspension of execution and sentencing to death. It was in 1996. I have written many times that abolishing death penalty was de facto illegitimate, because we have this kind of punishment in the Constitution and the Penal Code today. In order to cancel this form of punishment, it is up to the State Duma to make an adequate decision, because it is the State Duma that can change the Penal Code. The Russian Constitution says that death penalty is valid unless it is completely abolished.

The position of the Russian Orthodox Church is well-known. The President has repeatedly stated that toughening punishment does not eradicate crime. Yet, no one says that death penalty should be used here and there. State violence can be used very carefully, as one should analyze every little aspect before making a decision to kill or not to kill a scoundrel.

When Pravda.Ru asked this question to Sergei Pashin, he replied:

"Actually, you quoted Cesare Beccaria. This eminent jurist and humanist of Renaissance said so in the XVIII century, and I am pleased that our president shares this point of view. A debate is of course possible, but the Russian Constitutional Court wrote in its ruling back in 2010 that the trend to abolish death penalty was irreversible.

"In fact, the Constitutional Court's decision prevents the imposition of death sentences and the carrying out of executions. So it is possible to discuss, including selectively. But in general, from the point of view of our legal system, this discussion is useless. The intensity of death penalty does not affect the level of crime. There are countries where the abolition of death penalty led to a decrease in the number of murders. This happened in Canada in 1974."

Death penalty does not eradicate crime

There are other examples. In late December 2014, Pakistan lifted the ban on the execution of criminals convicted of terrorism. Can Russia do the same? Is it possible to execute for terrorism or - sex crimes - only incorrigible criminals that is?

"It questions the reliability of the judicial system, - Honored Lawyer of Russia Sergei Pashin said in an interview with Pravda.Ru. - Firstly, our judicial system is not to be relied upon much. Secondly, we can not execute terrorists, because jury trial has not been provided for terrorists since 2008, and the 20th article of the Constitution implies that it is impossible to bring down a death sentence without a jury trial. In addition, the legal position of the Constitutional Court, for reasons of equity, prevents from imposing death penalty, even if at least one region of the country has no jury."

Pravda.Ru asked Sergei Pashin to comment the remarks by well-known German poet and writer Goethe, a talented scientist and thinker, who also received the title of privy councilor and hereditary nobility for his public service in the duchy of Saxe-Weimar-Eisenach in 1782.

Here is what Goethe said: "If one could abolish death, we would not have anything against it, but abolishing death penalty would be hard. If it happened, we would have to reinstate it every once in a while."

"That was said a long time ago, - Sergei Pashin said. - The current situation has changed. And then you know, Goethe was a minister, but Goethe was also a writer and poet. The story of Margarita from the tragedy "Faust," whom the author executed for the murder of a child, was tormenting him. When he was signing a similar death sentence in real life, it was incredibly hard for him. That is an outdated quote. In Germany, there is no death penalty, but Germany does not want to retrieve it."

It just so happens that the thoughts of Cesare Bonesana-Beccaria, who died in 1794, still live today, while the aphorisms by Johann Wolfgang von Goethe that he published in 1829 are no longer relevant. Why so?

Pardon impossible to execute. Are we going to finally decide where to put a comma there?