The Russian State Duma decided against re-introducing the death penalty. MPs do not see execution as means of "eradicating evil," but caution that it would appease public opinion. Earlier, Interior Minister Vladimir Kolokoltsev said that he saw nothing wrong in the return of execution. 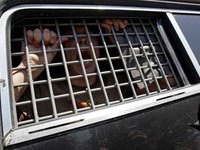 Talks on the return of the death penalty as capital punishment for the most serious crimes have been ongoing from the date of abandonment of the death penalty in Russia. The reason for the differences in the circles of the legislators and members of the parliament is the notorious public opinion, which, in theory, should be carefully considered by MPs. Public opinion on a number of high profile crimes unanimously claims that some prisoners do not deserve life sentence and should be sentenced to death.

People's point of view was suddenly supported by the Minister of Internal Affairs Vladimir Kolokoltsev, who said that he, as a citizen, did not see anything wrong in the return of capital punishment. Head of the State Duma Committee on Legislation Pavel Krasheninnikov at a recent meeting of the State Duma said that the re-introduction of the death penalty would appease the public opinion, but would not "eradicate the root of evil."

Parliamentarian Alexander Kulikov, on the contrary, cited statistics of the Soviet times, from which it appears that capital punishment was a measure that limited and reduced the level of crime in general.

"I think that now all the talk about the return of the death penalty, by and large, is meaningless," told presidential advisor, head of the Presidential Council for the Promotion of Civil Society and Human Rights Mikhail Fedotov to a correspondent of Pravda.Ru. "To talk about the return of the death penalty, we must re-write and pass a new constitution. I would emphasize that it would take a complete re-write and not an amendment. Only in this case the return of such penalties would not be contrary to the provisions of the Constitutional Court. So these issues are now only theoretical and have no real application. As for me as a citizen, I am against the death penalty, but this is irrelevant. "

Death penalty was abolished in Russia in 1997. It was then legally established that in Russia capital punishment could not be implemented or appointed. The issue of the final application of the law was clarified by the Constitutional Court only in 2009. The court determined that, under international law, the application of capital punishment is not a guarantee for a citizen not to be subjected to the death penalty under any circumstances. This is required by a variety of international acts.

Supporters of abolition of death penalty point to the fact that execution is not a punishment that would compensate for the loss of the society from a criminal offense. In particular, detainees imprisoned for a long-term (life-long) period fulfill a social function by working and producing products that may be needed by the society. This is a way to compensate financially. In addition, according to supporters of the "humane" approach, life imprisonment may guarantee that sooner or later justice mistakes (if any) can be identified and corrected. After the execution of capital punishment this is impossible.

However, despite the feelings of lawmakers and those who support the rights of the convicted to life (guaranteed by the Constitution), in high profile crimes the society has one desire to punish criminals - by sentencing them to death. The economic aspect speaks in favor of this measure, because life-long detention requires government expenses, i.e., taxpayers' money. In addition, after 25 years of imprisonment, prisoners are entitled to petition for leniency, and in the event the petition is satisfied, a maniac or a murderer may once again be free.

Now Russia has five colonies where prisoners serve life sentence. If we consider that the detention regime is incredibly strict, would a prisoner released after 25 years of living in such circumstances be dangerous? However, after a quarter of a century the offender may not even want to go into strange to him world without family, friends and any social adaptation.

The talks about capital punishment resumed with new vigor over the last year, when the details of a series of crimes became apparent. In particular, the killing and abuse of children reported by the media generated a wave of outrage over the "humanity" of the legislation. If citizens wishing death to children murderers cannot arrange a lynching (such attempts at times had to be stopped by special forces), the society whose opinion lawmakers have to consider is asking to punish the killers legally and according to the law. The law, however, remains silent.