Death penalty disputes as an indicator of weakness 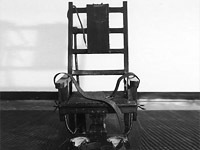 In Russian society there is no consensus on the death penalty. Moreover, there had never been any consensus on this matter anywhere. Any of us could come up with the most authoritative opinions of hundreds of people sharing one of the two opposing points of view, and digging on the Internet, anyone can find plenty of quotes on this subject.

On May 16, 1996 Russian President Boris Yeltsin issued a decree entitled "Phasing out the use of the death penalty in connection with Russia's entry into the Council of Europe." On February 2, 1999 the Constitutional Court approved a moratorium on the death penalty in Russia. In the Criminal Code death penalty was preserved as a punishment for a number of very serious crimes. The moratorium was to expire in 2010, however, the Constitutional Court banned the Russian courts to issue death sentences.

Debates on the death penalty break out with a new force in those moments when resonant crimes are committed, like terrorist attacks in Norway. During such periods, the voices of those hungry for blood and calling for the revenge are amplified. In short periods of calm "peaceful" citizens voice their opinion.

Personally, a statement of the great Goethe particularly resonates with me. He said that if we could abolish death, we would not have anything against it, but abolishing the death penalty would be difficult. If this happens, we will have to restore it from time to time.

It has nothing to do with the fact that this was said by a brilliant poet and writer, a talented scientist and thinker. These are words of a statesman. Not many know that in 1782 Goethe was granted the title of Privy Councilor and hereditary nobility for his public service in the duchy of Saxe-Weimar-Eisenach. We can assume that, speaking about the death penalty, Goethe had his own experience in mind. In contrast to Goethe, other intellectuals did not have such experience.

French writer and philosopher Albert Camus and the English writer and essayist Arthur Koestler could be considered the oracles of the death penalty. These heralds of humanity believed that justice is no less shocking than the crime itself.  Unlike, say, a lawyer Montesquieu, who claimed that the death penalty arises from the nature of things, draws from the mind, from the origins of good and evil. Or encyclopedic Diderot, who wrote that because life is the greatest of blessings, everyone agrees that the public has the right to deny this benefit the person who would deny it to others.

Indeed, capital punishment can neither put an end to crime, nor even serve to frighten those who plan evil deeds or are morally ready for them. European chroniclers of the past have noticed that purses were mostly stolen in the areas where the thieves would be publicly chopped off their hands. In China (a great country Russians also like referring to) the death penalty is still public. Although the number of executions in China is a state secret, according to some estimates, every year two to seven thousand death sentences are issued in the country.

This means that the death penalty is by no means a panacea for crime and humanists advocating for its abolition are seemingly right. There are arguments that it is impossible to accurately determine the guilt of the person and innocent persons are being executed. This is a very strong argument. Besides, there is a need for full transparency of justice, but it is not always possible. First, at times the details must be kept secret, and second, to avoid giving the offender a public tribune.

Clever lawyers and corrupt judges will be able to circumvent the law. Therefore, complacency of the liberal public, thirsting for an independent judiciary and the inevitability of punishment, is surprising. Russian human rights activists make the necessary equivoque to the West: look, even in the United States innocent people have been condemned, and what is going on in Russia!

If they take the time to think and observe, they will notice that human rights must be fought for, the democracy is not given once and for all, and each generation should be able to assert their rights, rather than flee to other countries where others have done it without them, but for them. In fact, this is the kind of fellows who see Russia as the evil, but not evil things in Russia. For them, any Russia is autocratic, Soviet or post-Soviet, for them it is the devil incarnate.

In addition to the haters, or, in the words of Pushkin, Russia detractors, there is a criminal lobby interested in abolishing the death penalty. There are political groups who pursue their own goals when supporting a moratorium and abolition of the death penalty. They often argue that a life sentence is a worse of a punishment than the death penalty. It is human psychology to not lose hope to get out of the most hopeless situations. The only place of no return is death.

"When I am told that a life sentence is a painful punishment, I say that I am a humane man, and do not want to torment even inveterate criminals - let's shoot them!" stated a Soviet and Russian writer, LL.D., Professor Daniel Koretsky. His opinion is worth a lot, even though for the same trivial reason - he has been professionally engaged with the criminal world for many years. He started as an investigator, member of the appeals committee in Rostov region.

Knowledgeable people say that the executioners dream of their victims. Not all carnivores are capable of killing an animal, most of those advocating for the death penalty would never raise their hand at another human being, although in the heat of passion some would be able to strangle a villain. Discussions on the death penalty are not the evidence of the prevalence of the principle of tolerance in the society (perhaps only in the form of tolerance for a different point of view). The controversy over the death penalty is an indicator of weakness of honest people before scum.

Innate sense of justice urges us to strike back. In order to avoid Lynch trials and triumphant law of an eye for an eye, a tooth for a tooth, the most reasonable solution would be to preserve the death penalty, even occasionally to have an opportunity to apply capital punishment to an individual. In order not to find ourselves as helpless as the Norwegians in the current situation, when their toothless Themis does not permit a punishment for Anders Breivik Bering besides locking him up for two decades. If the death penalty should be abolished, the murderers should do it first.