World celebrates 60th Anniversary of Victory over Nazism in Moscow

Moscow begins celebrations to mark the end of WWII

50 Heads of State, of Government and of international organizations are currently participating in the celebrations of the 60th Anniversary of Victory in Europe today and tomorrow in Moscow. The only CIS President who will not participate is Mikhail Saakashvili of Georgia. 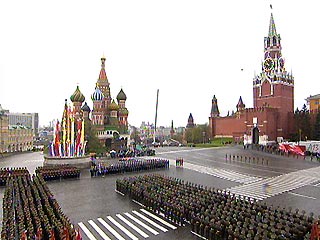 Today, 9th May, fifty heads of state, of government and of international organizations will stand alongside President Vladimir Putin to remember the victory over the Fascist tyranny of Nazism which took away the lives of around 25 million Soviet citizens between 1941 and 1945. The President of Georgia is the only one in the CIS states who has decided to boycott the event.

Several issues are at stake here. While the deaths of those heroes who gave their lives to make the world a better place for future generations are to be remembered and honoured, while the human sacrifice of those who lived through the war years must never be forgotten, we must also remember the millions of Germans who lost their lives, along with the citizens of other countries, as the world stood firm against Fascism and fought for right and reason against the forces of evil. 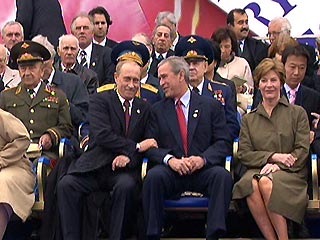 The Great Patriotic War was supposed to be the war to end all wars. However the vacuum created by the implosion of Germany created a stand-off between Soviet and American forces which would stagnate into the Cold War which neither side could afford to lose.

In the event, the Cold War never became a war as such and so neither side lost nor won. Today, the Soviet Union, its objectives having been fulfilled, has evolved into the CIS. The Russian Federation and its allies stand for a continuation of the spirit of peace and good will pursued by the USSR, they stand for a development of bilateral relations in a spirit of friendship and equality, a brotherhood of nations living around a common lake – the sea.

Today, despite the efforts of the Russian Federation to guarantee that international crises are resolved and managed in the proper forum of law, the United Nations Security Council, there are still those who would rather pursue their own agendas in disrespect and open breach of international law, while justifying wars in which tens of thousands of innocent people were slaughtered with lies instead of a sound casus belli. 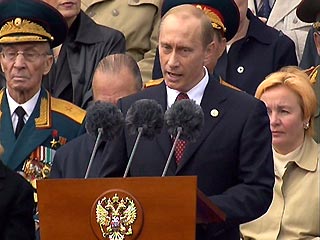 While we celebrate the victory in Europe 60 years on, we must also question whether what was fought for and gained is not still under threat today. The tears of the Russian child slaughtered by a Nazi storm trooper tasted of salt, just like the tears of the Iraqi child whose limbs were blasted away by an American pilot.

On the ORT photos: Outtakes from the Victory Parade on Moscow's Red Square, May 9th