In 1984, Alexey Pajitnov, a Russian programmer, gave the world a new game that was later referred to as "the brain drug." Anyone who has ever played Tetris is aware of the mesmerizing power of this seemingly simple game. Scientists keep discovering its new properties. It treats depression and post-traumatic disorder, but it also tricks our minds. 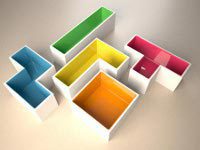 Working in the computer center of the Academy of Sciences, Alexey Pajitnov developed a game simple in its genius. The game won the hearts of people all over the world. He got the idea of ​​Tetris from "pentamino", or "polyominoes" game - a board game where one pieces together geometric figures of various shapes composed of five squares.

In Tetris, figures of different shapes (but always consisting of four cells) fall from the top into the rectangular "glass" 10 cells wide and 20 cells tall. The player can rotate the figures in flight, move them horizontally or accelerate their decline. A figure continues its flight until it hits a different figure or reaches the bottom of the glass. When a horizontal row of 10 cells is filled, it disappears. All figures located above it are lowered by one cell. The pace of the game gradually increases. "Tetra" (four) in the name of the game is the number of cells that make up each piece.

Writer Jeffrey Goldsmith was so obsessed with Tetris that he suggested that Pajitnov created the world's first video drug. Experienced players that play Tetris for hours later see the falling figures in their dreams and sometimes even in reality. Pajitnov's creation first interested computer games developers, and in 1991 he was invited to work in the U.S. After a while, scientists puzzled by the phenomenon of the popularity of Tetris and its effect on the brain got interested in him as well.

In 1999, American and Canadian researchers discovered that playing "Tetris" leads to an increase in the thickness of the cortex of the brain and an increase in the efficiency of its work, at least in girls. The researches conducted a series of experiments with a group of 26 teenage girls aged 12 to 15.

For three months, 15 of them played Tetris for half an hour a day, and 11 others did not play at all. Before and after the experiment, all the girls had structural and functional magnetic resonance imaging (MRI). Structural MRI was used to estimate the thickness of the cerebral cortex, and functional - to assess its productivity.

The analysis of the data received in the experiment showed that the girls who played Tetris had increased productivity of the brain, as well as increased cortical thickness in some regions of the brain. It is difficult to say why the researches chose teenage girls for the experiment. Perhaps it has to do with the fact that girls are less encouraged to play logics games and games "with a technical bias," and therefore, like any new activity, the game was good for their brain development.

In 2010, researchers at Oxford University found that Tetris was helpful in the treatment of post-traumatic stress disorder and related depression. PTSD can occur in the military returning from hot spots, witnesses and victims of terrorist attacks, natural disasters, people involved in accidents, and so on. Typically, this disorder characterized by increased anxiety, outbursts of aggression or depressed mood, as well as the inability to get rid of terrible memories.

Scientists found that playing Tetris occupies the brain in a specific way and prevents it from storing traumatic memories. In the experiment, psychologists asked 60 volunteers to watch a video with scenes of violence or someone's death. After half an hour of watching the volunteers were divided into three groups: the first sat down to play Tetris, the second took part in a small 10-minute contest, while the third one just sat and did nothing.

Next, participants were asked to go home for a week to record the memories of the video. The results showed that people who played Tetris, on average, mentioned the video a couple of times, while others mentioned it much more frequently (four to five times). It turns out that the game "drove away" bad memories. Psychologists can add that Tetris gives people the illusion of control, even if only over a tiny piece of the reality that fits in a virtual "glass" ten by twenty cells.

Tom Stafford of the University of Sheffield (UK) says there is a catch here. Many users are attracted to games that simulate restoration of order. These games can be played endlessly. Our brain is focused on quick decision making when faced with a challenge. Tetris in essence is an endless task, as soon as you are done with one part of the puzzle, that row disappears and the game continues. Every time we feel satisfaction doing it right, and our attention is immediately grabbed by a new figure.

Stafford said that it was also important that each successive figure is not just a new challenge, but also a potential solution. Studies have suggested that Tetris players prefer not to figure out the solution in their mind, as opposed to, for example, chess players. They mentally twirl each figure in an attempt to figure out where it can be placed. In the real world we can rarely afford quick action without any hesitation.

The problem is that the mind allows itself to switch only when the goal is reached, and Tetris is an endless game without a definitive purpose. Moderation is key, because the illusion of easy achievement may discourage motivation to achieve something in real life.