Argentina: The USA knew of the kidnapped babies

Argentina: The USA knew of the kidnapped babies 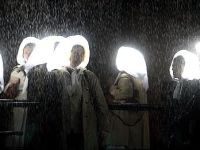 USA finally opens archives on kidnapped Argentine babies seven months after refusing the appeal of the May Square Grandmothers to shed light on their family members who vanished, saying that it was a "waste of time and resources". The documentation released by the US Embassy in Buenos Aires is shocking and highlights the evils of Fascism.

In May 2011, the Democrat Congressman Maurice Hinchey stated "It would be a waste of time and resources" for the US institutions to have this documentation released, after an appeal by the group Abuelas de Plaza de Mayo (May Square Grandmothers), a civilian association set up to investigate the allegations that children and babies were taken from the families of members of the opposition to Argentina's Fascist regime.

Now, important documents have been handed over to the Abuelas and how shocking they reveal themselves to be. They point towards the systematic kidnapping of children from the families of the members the opposition against Fascism in Argentina and their subsequent registering as the children of the members of the regime. Others were sold, or were simply abandoned in the streets.

After concerted action by the Abuelas, three paragraphs of the document, blocked since 2002, were revealed to show that there was a systematic policy of kidnapping children: "Systematic Plan to appropriate Children" practised by the Fascist forces. This policy was defined and organised by the military, to seize the children of the detained or disappeared opposition members.

The document in question reveals communications between the Argentinean Ambassador in 1982, Lucio Alberto Garcia de Silar, and the US Secretary of State official responsible for Argentina, Elliott Abrams, in which the former informed the latter that the "disappeared" were dead and that their children had been snatched from their families.

Abuelas have to date recovered the identity of 103 of 500 babies kidnapped by the Fascists. These children were deprived on knowing who their true parents were, or of living with their families.

That the USA knew and evidently did nothing about it cannot surprise anyone these days. After Abu Ghraib, after Guantanamo Bay, after Vietnam, Iraq and Libya, what to expect from the Devil but demonic behaviour?