Children to choose their own parents and representatives 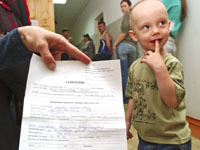 Eighty Russian and ten Ukrainian organizations that defend the interests of family, children and parents, conducted a conference in St. Petersburg. The participants of the conference addressed the governments of their countries with a request not to approve a certain document from the Council of Europe. The document is titled "The project of recommendations on the rights and the legal status of children and parental duties.

The participants of the conference claimed that the document undermines traditional family. In accordance with the document, it is the state, and not the parents, that holds priority in raising children and representing their interests. The document also limitlessly expands children's rights. It particularly stipulates the rights for children to pick their own parents.

The document was prepared by the Committee of Ministers of the Council of Europe. The paper puts forward the idea to establish balance between the "biological truth" reflecting the biological and genetic parenthood and the "social or psychological parenthood" reflecting the fact of child's living with someone or someone's care for the child."

Thus, on the level of ideology, the rights of genuine parents are equated with the rights of any other people, who hold custody of a child. The authors of the document even avoid the word "parent" and replace it with a special term - the "carrier of parental responsibility."

On the one hand, the document admits that a "woman, who gives birth to a child, should be considered as the legal mother of this child." On the other hand, the text of the document clarifies that the "states are entitled with changing this paragraph to replace it with a different maternity establishment rule."

The role of the state in family affairs is unrestricted. The document stipulates the suspension and deprivation of "parental responsibility" by the decision of "competent authorities." The document does not mention legal argument as an option here.

Children's rights are formulated in an abstract way too. The document sys that conscious-enough children may have the right to file an application to be deprived of "parental responsibility." In case of a conflict of interests between a child and a carrier of parental responsibility, the latter is supposed to be relieved of the functions of a legal representative of a child. The state will subsequently appoint a special representative for such a child afterwards.

Pavel Parfentyev, the head of public organization "For Family Rights", believes that there are attempts being taken in the world today to discredit traditional family to take it beyond the scope of public values.

It appears that it will be up for the above-mentioned "competent authorities" to decide who deserves the title of the "carrier of parental responsibility." Something like this already exists in several European countries, particularly in Norway. Pravda.Ru has published a series of articles on the subject. Norwegian human rights activists say that the local child protection services take as many as ten children from their own parents every day.

What if children have the right to literally refuse from their parents just because of the "conflict of interests?" The document says, though, that it is going to be only a recommendation (if the Council of Europe approves it, of course).

"Such recommendations can be actively used by adequate lobbies. Those lobbies put pressure on the state as they promote their laws," Pavel Parfentyev said.

More importantly, such documents can only make other people think that traditional family is some sort of anachronism that has nothing in common with the modern society.