Some Russians still live in the USSR 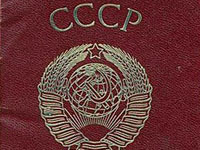 The Soviet passport stopped its existence seven years ago. Nevertheless, about 5,000 residents of the city of Sverdlovsk live in a non-existent country. They refuse to exchange their ID for a Russian passport. What is the reason behind such absurd situations? Do those people feel nostalgic about the erstwhile superpower or are they stuck-in-the-mud kind of people? What can be done about such citizens who can not even be referred to as citizens?

A local news agency says that many of those "Soviet passport people" ask officers of migration services to glue in new photos in their invalid passports. Some others decide not to exchange their Soviet passports for Russian ones in order not to pay the state duty of 1,000 rubles ($30). There are people who say that the new passport insults their religious feelings.

Russia has already started issuing passports of new generation. However, some people still prefer to keep the passports that they have been holding for many years. Antonina Pronina, a 45-year-old woman from Vladivostok, turned to the court in an attempt to give a new life to her "hammer and sickle" ID.

One may say that a human being is supposed to have an ID only if he or she needs the document. Funny situations with Soviet passports issued back in 1974 continue to occur in the country today. It seems that the people do not understand whether Soviet passports are valid for the citizens of the Russian Federation and on what grounds they can be valid. Officials do not provide any clear explanation to the problem either.

The exchange of the Soviet passport for the passport of the citizen of the Russian Federation ended on July 1, 2004. However, there are people who have not exchanged their passports for some reason.

There are people, who do not want to exchange their old passports for religious reasons. They have a full right for it in accordance with Article 28 of the Constitution of the Russian Federation. This seems to be an absolutely absurd situation. There was no religion in the Soviet Union, whereas religious Soviet citizens did not have any complaints about "godless" Soviet passports.

Those people claim that the ornamental design of the inner pages of the modern Russian passport contains the "number of the beast" - 666.