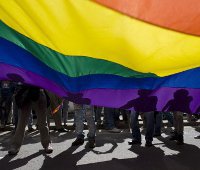 A journalist of RIA Novosti, one of Russia's larges news agencies, was fired after a homophobic post that he made on his blog. The administration of the news agency said that such views expressed by one of its reporters discredit the reputation of the agency and its employees.

"I would like to hope and believe that this filth will never be in Russia. I do not need this "freedom and democracy." I don't have enough tolerance for that, and against my will I start thinking about some sort of a powerful bomb that would be exterminating only sodomites. I give you my word, if all these perverted buggers die, the Earth would become much cleaner."

The journalist deleted his post later, but reposted an edited version of it. A gay pride parade, he wrote, is a filthy and disgusting event, whereas its members are "beasts that have lost the human face." "We have enough of our own excrement and faeces, and we don't need more of it coming from the West," he wrote. "There should not and must not be any gay parades and prides in Russia," Troitsky wrote. According to him, "this or that method of intercourse is a purely private, rather than a public matter."

Also read: Europe to give Russia lessons of homosexual love

Troitsky's posts shocked many Russian bloggers. They sent an email to Svetlana Mironyuk, the editor-in-chief of RIA Novosti with a request to "give an adequate assessment to Mr. Troitsky's statements." One of the authors of the email said that one can write anything their conscience lets them write in their personal blogs, "but one shouldn't forget that Nikolai is a public figure, whose reports appear in the largest news agency of the country."

"In any normal country, Troitsky would lose his job the next morning. He would spend the rest of his life at courts, trying to defend himself in countless trials," a Russian blogger wrote.

The senders of the above-mentioned email soon received a reply from the chairwoman of the press service of RIA Novosti Alla Nadezhdina. She wrote that the agency shared the indignation of the bloggers. "We promise to take measures against Troitsky in accordance with the Labor Code of the Russian Federation," Nadezhdina wrote.

Nikolai Troitsky was fired the next day. He lost his job three days after his infamous post.

There are many incidents in international practice when employees would be fired because of provocative or insulting posts that they would make on their personal webpages. As for Troitsky, the reason of his dismissal is much more interesting than the fact of it per se.

Judging upon the Russian mindset, the majority of people in the country could agree (or agreed) with what Troitsky wrote. If the story took place in the United States, no questions would arise at this point. Unlike Russia, the American society is much more tolerant about the issue.

RIA Novosti said that Nikolai Troitsky violated the corporate code of conduct. The code does not allow employees to distribute the information that defames the honor and dignity of their colleagues, as well as of the agency itself.

"The man, whose post on top of that reflected his attitude to the Russian language, can not represent the most contemporary, technological and young news agency in Russia," the agency said in a statement.

Blogger Marina Yudenich paid attention to another interesting aspect in this story. Nikolai Troitsky has never watched his language on his blog. He was usually very expressive in his posts when he was writing about political situations or when he was expressing his views about political leaders.

Yudenich looked through the journalist's older posts and found out that he was regularly insulting the president and the prime minister of Russia.

"He has written a lot about "sodomites" before, and what? And nothing. It just so happens that the agency agrees with his assessments of President Medvedev and Prime Minister Putin. This is an amusing position of the state-run agency, don't you think so?" Marina Yudenich wrote.