Europe to give Russia lessons of homosexual love 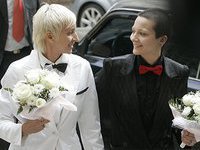 The European Court of Human Rights accepted the suit from representatives of sex minorities in Russia. Two female Muscovites, Irina Fet and Irina Shepitko filed a lawsuit at the court claiming that the authorities of the Russian Federation refuse to register their same-sex union. Even if they win "homosexuals vs. Russia" case, will it affect the situation in the country in general? Will they manage to teach the Russians a lesson of notorious Western 'tolerance?'

The two women sent their suit to the court in July. According to the lawsuit, the Russian authorities violated Article 12 of the European Convention, which guarantees the right for marriage, as well as Article 8 and 14, which defend the right for respect of family life and the right not to be discriminated.

On May 12, 2009, the Tverskoy Registry Office of Moscow refused to register the marriage between the two women. The decision was based on a simple explanation: "The primary principle of marriage in Russia is a union between a man and a woman."

Irina Fet and Irina Shepitko subsequently filed a number of lawsuits, but the courts upheld the registry's decision: only heterosexual individuals are able to contract marriage in Russia. It is worthy of note that the two Irinas obtained the official status for their relationship, albeit not in Russia. They did it in Canada. Some time later, the Embassy of the Russian Federation in Canada acknowledged their certificate for marriage as legitimate.

The happy newlyweds did not calm down and sent a complaint to Strasbourg in July. The court registered the complaint, which raised the issue of the rights of homosexual individuals in Russia yet again.

The attempts, which homosexual individuals take in Russia in an effort to organize a gay pride parade in Moscow, have spun off numerous jokes. No matter how hard the Russians try to live the European lifestyle, we have a lot to do to reach their level of tolerance. One may continue blaming the authorities for ages, but the fact remains: the majority of Russians are not ready to accept same-sex love as a social norm.

It is hard to say what exactly annoys Russians in homosexuals. Some people say that such relationships are unnatural, others claim that the demographic situation in the country leaves much to be desired. However, it seems inadequate to lay the blame for low birth rates in the country on those who choose to love somewhat differently.

There is no law in Russia that bans homosexual activities. However, most people just do not accept the phenomenon. Some activists of the movement, which defends the rights of lesbian, homosexual, bisexual and transgender individuals (LGBT), believe that the efforts, which they take to organize the march, trigger enmity on the part of the society.

In 2005, eight LGBT organizations described gay pride parades as provocative and said that one should not be too much obtrusive in demonstrating their sexual orientation, because it only creates more obstacles for sexual minorities on the way to integrate in the society. Needless to say that many disagreed with such a point of view.

Nevertheless, all the attempts to hold gay parades in Moscow failed one after another. The Moscow authorities stated that the marches would only turn out badly for the demonstrators themselves. Nikolai Alekseyev, one of the leaders of the Russian gay movements, addressed the court in Strasbourg, which, obviously, took his side.

The judges said that the Moscow government should guarantee security for the parade. The authorities, they added, did not give the minorities an opportunity to say something in their defense and be heard.

A recent opinion poll, conducted by the Public Opinion Fund, revealed that 77 percent of the polled supported the Moscow government's decision to ban the parade. Ninety-two percent of those, who condemn homosexuals, said that they supported the ban. Those, who do not condemn same-sex relationships, also expressed their agreement with the Moscow authorities - 65 percent. Only nine percent of respondents said that they disapproved the decision to ban the gay pride parade in Moscow. In Serbia's Belgrade, dozens of people were injured during a gay pride parade last year.

Will that experience repeat in Moscow? Russia is not the USA, where a homosexual individual can file a lawsuit and win the case if he or she suspects an intolerable attitude to their orientation.

A research conducted by US-based sociologist, Professor Richard Florida, revealed that sexual minorities show a positive influence on society and economy in general. The more gays live in a city, the more open the city is to all kinds of life. In such a city, the professor believes, it is easier to be yourself during integration.