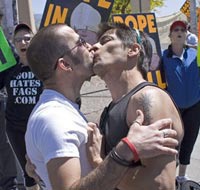 The gay community of Russia, or the community of lesbian, gay, bisexual and transsexual individuals (LGTB), tries to promote tolerance to sexual minorities in the country with the help of most radical and absolutely non-tolerant methods. They try to do it every year attempting to organize gay pride parades in the center of Moscow. On May 28th, homosexuals tried to march in the Alexandrovsky Garden, near the Tomb of the Unknown Soldier (near Read Square and the Kremlin) and along Moscow's iconic Tverskaya Street.

The Moscow government previously refused to allow the parade of homosexuals in spite of the fact that the march was announced as a cultural and educational event. The organizers of the march said that their action would be devoted to the history of attitude to homosexuality in culture and science. Moscow said no to the event and referred to the International Convention for the Protection of Human Rights and Fundamental Freedoms. The document (dated from November 4, 1950) says that the right for the freedom of peaceful meetings can be restricted to prevent massive riots and to protect health, morality, rights and freedoms of other people.

Moscow officials also said that they had received numerous requests from representatives of religious confessions, public organizations, Cossacks and separate individuals not to approve such a public event as a gay march in the capital.

The organization committee of the Moscow gay parade said in response that the authorities banned the public actions of homosexual individuals for the sixth year running. Nikolai Alekseyev, the leader of GayRussia.Ru LGBT project, said at the news conference, which took place at Moscow's Ritz Carlton Hotel, that his organization was not breaking any laws.

"We are not violating any laws. The European Court for Human Rights is on our side as the supreme court instance. That is why we intend to realize our rights for the freedom of meetings in this city regardless of the opinions of the Moscow government. We will do it, we are not going to hide. Russian and Moscow authorities will be fully responsible for it, it's their problem," Alekseyev said.

The events, which took place in Moscow on Saturday, showed that the problems of the Moscow gay pride parade were not just about the struggle between LGBT individuals and the Moscow government.

Those homosexuals, who appeared on Manezhnaya Square at 1:30 p.m. with flags and billboards, were attacked and beaten by radical youths. The police had to defend the representatives of sexual minorities from aggressive young people, as well as from border guards, who were celebrating their professional holiday on Saturday.

The gay march in the Alexandrovsky Garden did not take place. The police arrested several members of the gay parade and pushed the aggressive crowd away from the square.

Another action of homosexuals was supposed to take place on Tverskaya Street at 1:30 p.m. as well. Many of those who could not the accept the idea of the gay march in Moscow, gathered on the street too by 1:15 p.m. A small group of homosexual individuals appeared near the monument to Yury Dolgoruky. They started to unfold their posters and flags, but were detained by police officers.

It is worthy of note that the arrests were conducted to defend the detainees against the aggressive protesters. By 3:00 p.m. The police arrested as many as 40 people - both LGBT activists and their opponents.

Just like before, the gay pride parade in Moscow was ruined. It goes without saying that the West will harshly condemn the "homophobic" Russia for violating the rights of homosexual individuals. There will be a share of truth in those accusations, albeit only a share. The rights of the LGBT community in Russia get violated indeed, but only when activists attempt to display their homosexuality publicly and provocatively. Let's just face it - holding the gay march near the Tomb of the Unknown Soldier is a challenge to the society.

It is the public propaganda of homosexuality in Russia that evokes so much protest and anger with other people. It is not about the cultural and historical attitude to homosexuality in the country. It is about the acceptability of public propaganda of various sexualities in general. In the long run, are there many of those who seem to care about what kind of love two people practice at home together? But if they try to advertise their sexual preferences for everyone, it shall be considered as a violation of other people's rights.