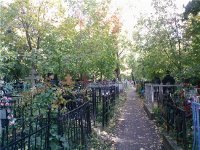 On Sunday, Orthodox Christians are celebrating the most important religious festival - Easter, or the Resurrection of Christ.

The tradition to give each other colored eggs on Easter originates from Apostolic Age. Preaching Gospel, Maria Magdalena came to visit Roman Emperor Tiberius. One was not allowed to enter the palace of the emperor without a gift. Maria Magdalena could not bring anything to the emperor but an egg.

When Maria came to Tiberius and announced the news about the Resurrection of Jesus Christ, the emperor said that it was just as impossible as an egg turning red. As soon as he said that, the egg that he was holding turned red.

Not many people know that the Orthodox Church does not approve the widely spread Russian tradition to visit cemeteries on Easter Sunday. Representatives of the Russian Orthodox Church continue to remind people that the holiday of Easter should not be turned into the "cemetery day."

"The Holy Easter is the heart of the entire yearly cycle of offices. The Resurrection of Christ inaugurate the victory over death and personifies universal resurrection. That is why, when we are going to a cemetery on Easter, we exercise spiritual callousness and complete misunderstanding of the point of the redemptive teaching of Christ," priest Iov Gumerov said.

Archpriest Vsevolod Chaplin, the head of the Department for Relations between the Church and the Society, believes that the tradition to visit cemeteries on Easter Day appeared and became popular during the Soviet times. During the Soviet era, most people could not be informed about Orthodox traditions and customs.

"There is no bigger sin, than praying for the deceased on Easter Sunday. To make this festival become the "cemetery day" runs contrary to the point of the holiday and to the religious tradition," Chaplin said.

According to him, Easter and the Holy Week that precedes the feast is a very special and solemn period of time. Funeral services can be conducted during this week only if really required indeed. It is recommended to visit cemeteries and pray for the souls of late relatives on Tuesday after Quasimodo. This day in Russia is known as Radonitsa, or the Day of Rejoicing.

Late Patriarch of Moscow and all Russia Aleksi II said: "The days when the Church urges people to remember the deceased are determined strictly. Neither Palm Sunday, nor Easter are categorized as such."