Two Russian Lesbians Fail to Have Their Marriage Registered in Moscow

An attempt of a lesbian couple to register their marriage in Moscow resulted in a failure. In May of this year, a Moscow Civil Registrar Office denied a request of the couple, Irina Fet and Irina Shipitko, to officially register their marriage. The officials provided a simple explanation: “The Russian Family Code clearly states that marriage is a union between a man and a woman, which rules out same-sex couples.” The ladies disagreed and filed a complaint. 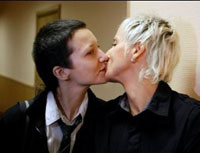 Two Russian Lesbians Fail to Have Their Marriage Registered in Moscow

However, high-ranking officials also turned out to be the supporters of traditional marriages and found the actions of the Civil Registrar Office legitimate.

It’s interesting that neither the Constitution nor family-related legislation state that only heterosexual couples are allowed to get married. This lack of legislation is an old argument of gays and lesbians. At the court hearing, the ladies appealed to the European Convention for the Protection of Human Rights, but to no effect. The court ruled that since same-sex marriages are not allowed, there can be no further discussion. The couple was not surprised with this decision.

The ladies knew that they would lose the case, and planned a wedding in Toronto, Canada, at the end of October. A well-known gay judge, Harvey Brownstone, will marry the couple in tolerant Canada, and upon their return home, the couple will fight for acknowledgement of their marriage in Russia.

They believe that Russia, being a developed country, should legalize same-sex marriages. Such marriages are already legalized in the Netherlands, Belgium, Spain, Republic of South Africa, Norway, Sweden, and in American states of Connecticut, Iowa, Main, Massachusetts, New-Hampshire and Vermont.