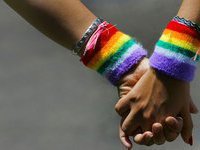 In spite of the fact that many Russians want to follow the European lifestyle, there are certain things, which Russian people just cannot accept. European homosexuals are legally allowed to march along the streets of their capitals and other major cities celebrating their love and liberties in gay pride parades. In Russia, most people prefer not to notice gays and lesbians at best.

A public opinion research center conducted a poll in Russia in May of this year. Respondents were offered to answer the following question: "Whom wouldn't you like to have as your neighbor?" Most typical responses included alcohol and drug addicts, former criminals and homosexuals. Sixty-five percent of the polled expressed negative feelings about the latter.

Apparently, homosexuals believe that it is the authorities that are guilty of all their problems in Russia. Officials do not let them organize parades and meetings, but if, let's say, the Moscow government authorized a gay parade, would the problem be solved?

Homosexuals from St. Petersburg have recently had a chance to see that such an assumption is wrong. Lesbian, gay, bisexual and transgender individuals of St. Petersburg organized the first coordinated picket in the city in November. The meeting did not go smoothly, though: the picketers were showered with eggs. Activists of "Equal Rights" movement had to end the action ahead of the scheduled time.

However, the people of unconventional sexual orientation are not going to give up. The homosexuals of St. Petersburg have recently celebrated their fourth victory at city courts.

Last summer, gay activists were going to conduct a picket in St. Petersburg to defend the rights of sexual minorities. The administration of the district, where the meeting was supposed to take place, did not authorize the event. The activists filed a lawsuit against the officials. As a result, the court found the decision of the local administration illegal.

In October and November of this year, similar judgments were delivered by three other district courts against local city administrations that banned meetings in support of sexual minorities.

"Our prime goal is to advocate equal rights for LGBT individuals in Russia including but not limited to public events in which we attract public attention to legal inequality and discrimination of gays, lesbians, bisexuals and transgender individuals in Russia. Since the LGBT community does not have representatives at government agencies, holding public events is one of the most efficient ways to advocate our rights. That is why the recent rulings of Russian courts, and the ruling of the European Court for Human Rights from September 21 2010 will be a signal to the authorities to stop violating and discriminating the rights of LGBT for the freedom of public actions," Maria Yefremenkova, the leader of LGBT "Equal Rights" organization said.

In October, the European Court for Human Rights in Strasbourg sustained the claim from GayRussia.Ru leader Nikolay Aleskeyev against the Moscow government. The court ruled that the government's decision to ban gay pride parades in Moscow was illegal. Now the Moscow government will have to pay Alekseyev a compensation of 12,000 euros and 17,500 euros extra to cover the costs of litigation. Alekseyev intends to spend the money on the upcoming demonstration in Moscow. According to Newsinfo, a "huge gay pride parade" will be held in the city in May of 2011, he promised.

Former Mayor of Moscow Yuri Luzhkov used to explain the reason why homosexuals were not allowed to hold parades in the Russian capital.

Many Russian bloggers joke that it would be best to hold the gay pride parade on the Day of the Airborne Troops so that the homosexuals would never want to hold any parades again.

In European cities, gay pride parades have become nearly a tourist attraction. The Russian reality is different, though: most Russians are not tolerant enough to see adult men in tight underwear and feathers kissing and hugging each other in public.

It is hard to say whether it is a positive or a negative factor. On the one hand, everyone is free to choose how they should live and whom they choose to love. On the other hand, the demographic situation in Russia leaves much to be desired. Therefore, the propaganda of gay love in the form of gay pride parades is not the best decision to make at this point.