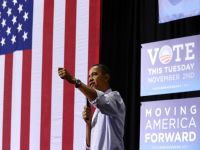 Before a symbol of hope and change, Obama faces the discontent and frustration of voters in Tuesday's vote Unhappy with the current economic scenario of the United States, Americans go to the polls Tuesday to elect representatives, senators and governors, with the same goal that rocked the presidential election two years ago: the desire for change.

The forecast is that Democrats, who hold majorities in the House of Representatives and the Senate, will be losing seats to the Republicans, who represent a break with the current government. In a setback for the Democrats, Republicans must win at least 225 of the 435 seats in the House and have a chance to get a majority in the Senate also.

Among the reasons that may lead to the defeat of the party of President Barack Obama, facing falling popularity at home, is the discontent of the population with the slow pace of economic recovery listed as the principal reason.

Far from the movement symbolized by the phrase "Yes, we can" - which indicated an ambitious agenda for a new country, Americans today live in a nation where the unemployment rate reaches 9.6% and economic growth seems insufficient for a new United States.

"The economic recovery is still slow and anemic, which provides a great opportunity to explore the opposition anger, fear and dissatisfaction and attract votes to undermine the government," said Kirk Buckman iG, Department of Political Science, University of New Hampshire.

According to data from the U.S. Department of Commerce, the U.S. economy registered a slight acceleration in the third quarter and increased 0.5%. The figure, which represents an annualized rate of 2%, is still insufficient to reduce unemployment, which, according to the government itself has no provision for improvement in the short term.

Government stimulus packages totaling $4 billion do not calm tempers either.

Besides the economic scenario, the Democrats find themselves weakened by the fact that the government fails to fulfill promises that brought Obama to the White House. Resources into housing, health care reform, even though approved, are still a goal to be implemented. Externally, the end of the combat mission in Iraq has not lessened the dissatisfaction with the war in Afghanistan, which has dragged on for the ninth year in spending billions, without having achieved the main aim of capturing the leader of Al Qaeda, Osama bin Laden.

"People are frustrated because they could not show that Obama would break with George Bush, change the way Washington works and defend their positions clearly within the party and the face of opposition," said Cristina Pecequilo, who specializes in American politics. "Their banner of 'hope' is going down the drain."

Much of the hope Obama projected is through the reforms promised in the campaign, such as health care, education and financial recovery. But if the projections of the Democrats' defeat in elections on Tuesday are confirmed, the measures that have not yet passed by Congress may balk in the legislature and compromise the next two years of his mandate.

"With a Democratic defeat in the House, it will be very difficult for any major reform to be approved," said David King, professor of public policy at Harvard University. "The forecast is paralyzed under terms of two years in Washington and a divided government."

Faced with a bleak scenario for the man who promised to change the country, Obama is trying to at least get a repeat performance of Democrat, Bill Clinton, who in 1994 lost his majority in Congress, but won reelection two years later. During the election campaign this Tuesday, Obama looks to confront the Republican - and the radical roots of the conservative movement's Tea Party, with an eye to 2012.

"For Clinton, the legislative election was a warning to transform his management. The same goes for Obama, who will have to think of a strategy that will reinvent his government, bringing to themselves Republican and Democrat dissenting voices," said Cristina.