“Russian men are lazy alcoholics.” It seems that Russian men are sick and tired of listening to such words. They now prefer to try something that they did not even think of before – find a lifetime partner outside Russia. 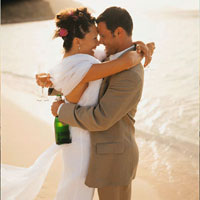 “We have phone calls from men who want to go west and marry a foreign woman. Female citizens of Italy, Germany and Luxembourg are very popular at this point. We could not even imagine such an experience before. This practice was popular with Russian women only, who wanted to find their husbands abroad,” the director of a Moscow-based marriage agency told the Komsomolskaya Pravda newspaper.

About 205 male Muscovites married ladies from foreign countries in 2009. What makes Russian men look for their brides abroad? Statistically, a single man is always in demand in Russia because women traditionally outnumber men in the Russian Federation.

“In my opinion, the only thing in which Russian women can beat European is the looks. I have some doubts about that, though – take a ride in the Moscow metro to see for yourself. European women are humble. They don’t wear tons of jewelry and makeup. They are easy-going and sweet and they won’t look at you from above if you don’t have a Mercedes or if you don’t tell them where you work. They do not have to wear high heels. They like wearing sneakers and they are cools with it. They are not mothers at 25, and they like the idea of going to an alternative concert, for example. They pay for themselves in restaurants and they don’t think of a man as scum because of that. They are mostly civilized and well-mannered, and it does not depend on money. If she has Polish, Czech and Serb roots, she will have something special about herself and you will never be bored with her,” a poster under the moniker Timofei wrote on a forum.

Sergey is 30. He is a manager, fluent in English, single.

“I do not like Russian women. If they are young and beautiful, they keep “milking” you for money: “I want these earrings, I want to go to that club, I don’t want a trip to Egypt, I want to go to Cuba.” If they are older, about 25 let’s say, it’s a disaster: “Marry me, I have to have a child, and I need a bigger apartment.” A man is not a partner for Russian women. He is a source of their well-being. The more well-being they can get from him, the better. That is why I am looking for a foreigner,” the man wrote.

Artyom is 34. He is a translator and feels very comfortable living abroad.

“I do not want to marry a Russian woman. When she gets married, she turns into an auntie before she turns 30. All of my male classmates, who married at their young age, have lovers now because they can not sleep with their wives. How can they be excited about that fatty creature in a bathrobe? European women are not like that. They respect themselves and take care of themselves at all times,” the man wrote.

It turns out that foreign women value Russian men. Synovate, an international research company, conducted a poll among over 10,000 people in world’s 12 largest countries. Researchers asked women to find out the men from which countries they consider most attractive. The most popular answer was: Italians. American men took the second position, whereas the third place belonged to Brazilians and Russians.

The researchers conducted a poll among men too and asked them if they consider themselves sexually attractive. 81 percent of Greek men and 80 percent of Russian men answered positively. The percentage among, for example, Chinese men was much smaller – 34%.

“Russian men have this positive self-esteem because of Russian women. Men have always been smaller in number in Russia because of numerous wars. Russian women always fight for men’s attention,” a researcher of the company said.

It is worthy of note that overwhelming motherly love also affects men, especially at their very young age. In Russia one may often witness the following situation. A mother and her little son enter a bus, the woman sits her child down and stands near him if there is no other vacant seat. As a result, little boys grow up thinking that women are inferior to them.

“ Russian men are normal . They are not alcoholics, and their self-esteem is high indeed. I am sure that Russian men are as good as foreign men. If a man makes good money, if he has a flat, a car, if he doesn’t smoke and does sports, what makes him worse than an American man, for instance? Nothing! That is why, such men can be demanding to women,” the director of a marriage agency said.

Russian men have good chances abroad. They have already conquered the world of economics (everyone knows Roman Abramovich for his yachts and Vladislav Doronin, who dates Naomi Campbell) and continue to conquer Hollywood. Many Russian students studying abroad also prove that they are smart young men. Do Western women still think of Russian men as losers?

“The majority of those men who look for a bride in the West have not actualized themselves in Russia. For them marrying a foreign woman is an easy way to emigrate. They believe that they will find a better life in another country with the help of a foreign woman. Things are not that simple in real life,” Irina, the director of a Moscow marriage agency said.

Irina believes that such men will have to deal with shock instead of pleasure in the West.

“Western women are independent. There is a marriage contract and separate bank accounts. Russian men are not ready for that. Someone will probably be happy there. But this phenomenon – “Russian man looking for foreign wife” – is not likely to become massive. The cultures are too different to mix,” she added.